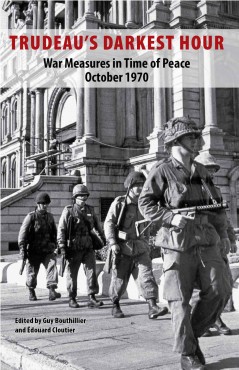 Forty-three years ago in the middle of the night the government of Pierre Elliott Trudeau proclaimed the War Measures Act following two political kidnappings by the FLQ. It thereby suspended the Constitution and all civil liberties, deployed 12,500 troops in Quebec—7,500 in Montreal alone— arrested 465 people without charges and detained them incommunicado without bail and without the right to legal assistance. It also entered and searched more than 10,000 homes without warrant.

In this rigourously researched and brilliantly presented anthology, Canadian political leaders, thinkers, journalists, and writers explain how the government of Pierre Elliott Trudeau deceived the people of Canada and denied justice when it proclaimed war measures in peacetime for the first time in history.

Tommy Douglas called it “overkill on a gargantuan scale.” Trudeau’s own ministers Don Jamieson and Eric Kierans said their case was not “compelling,” that they made a “terrible mistake,” and that their “common sense went out the window.” Peter C. Newman tells how Trudeau floated a “meticulously concocted lie” about a revolutionary provisional government in Quebec.

Trudeau’s Darkest Hour is dedicated to the memory of Tommy Douglas. “He showed political courage of the highest order,” wrote Eric Kierans.

“a considered and clinical examination… their (the editors’) efforts have been to present a wide range of views on the events of the time and place them an historial and political context. That the attitude of Eric Kierans, the Liberal cabinet minister who opined that “all our common sense went out the window” should closely parallel that of the NDP leader Tommy Douglas, who describes the Act’s imposition as “overkill on a gargantuan scale” is not a rhetorical device. It is an academic proof of the editors’ contention:  that the use of the War Measures Act in 1970 was in defiance of essential principles.” “Fear and Loathing in October” — Roverarts, Montreal

“I was delighted that someone finally had the courage to tell the truth: that Pierre Trudeau and Marc Lalonde both lied to me about why the War Measures Act was imposed– but it took 40 years before the facts were published. This is a compelling and essential book.” Peter C. Newman.

Listen to Guy Bouthillier interviewed by Phil Taylor of the Taylor Report, Toronto

Read article by Guy Bouthillier Forty years after in Counterpunch.org

Guy Bouthillier holds a law degree from McGill University and a PhD from the Sorbonne (Paris). He is honorary professor of political science at the Université de Montréal where he taught for thirty years.