Now available: BREAK AWAY, JESSIE ON MY MIND by Sylvain Hotte and the great Jane Jacobs’ THE QUESTION OF SEPARATISM

Now available: BREAK AWAY, JESSIE ON MY MIND by Sylvain Hotte and the great Jane Jacobs’ THE QUESTION OF SEPARATISM

Alexandre McKenzie lives on North Shore of the St. Lawrence River. In summer he rides the logging trails on his quad. Come winter he isa promising young hockey star who seeks solitude at a bush camp by the frozen lake. But when he plunges into a relationship with a girl plagued by tragedy, things turn ugly. Fighting his own demons Alex fights to hold his head high, like the bull moose that haunts him from the moment he meets Jessie. Break Away tells of friendship, family, pride and love. It’s a story that could happen wherever winter, hockey, and young people come together.

“From the first page it is hard to put down… excellent for teens… characters are lively, likeable and endearing.” Info-culture

“…“ They’re nice, the magic tricks, McKenzie, the fancy plays, the razzle-dazzle…. but I don’t give a damn if we won! That’s not what I’m here to talk about. It’s about you, your game.”

Normally, his lectures made me fidgety and I’d stare at the floor waiting for him to finish. But this time, I held my head up, grinning from ear to ear. My mind was a million light years from Larry’s office. I didn’t care about the game. Didn’t care about his advice or anything else. There was one indelible image planted in my brain: Jessie jumping up and down and cheering her heart out after I scored the winning goal.”….”

Sylvain Hotte is an award-winning writer of fiction for young adults and children. He was born in Montreal to an Innu mother and a Québécois father and now lives in Quebec City. His first series Darhan was astoundingly successful. Break Away, Jessie on my mind is the first book of a trilogy.

Casey Roberts is a translator and editor based in Montreal. 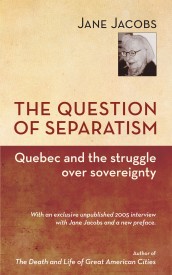 The incomparable Jane Jacobs passed away five years ago on April 25, 2006. Baraka Books proudly offers readers a new edition of her third, least-known book to mark that anniversary. Undeniably a genius on urban issues, Jane Jacobs also grappled with the question of nations and political sovereignty. Out of print since the mid 80s, The Question of Separatism, Quebec and the struggle over sovereignty now includes a new preface and an exclusive and previously unpublished 2005 interview conducted in Jane Jacobs’ Toronto home just a year before she died. Random House first published the book in 1980.

“There’s no writer more lucid than Jane Jacobs, nobody better at using wide-open eyes and clean courtly prose to decipher the changing world around us.” San Francisco Chronicle.

Jane Jacobs (1916-2006) was born in Scranton, Pennsylvania, and lived in New York and Toronto. She wrote six other books that have sold in millions, including the groundbreaking The Death and Life of Great American Cities (1961).