April 6 1994 is the fateful date of the beginning of the war/genocide/massacres in Rwanda. The plane of President Habyarimana was shot down over the capital city, Kigali, and horrific violence unfolded.

Everyone is asked/ordered to remember(and then told what to remember). Official memory in Rwanda is under the authority of the former Ugandan General and now

Rwandan President Paul Kagame, warmly supported by prominent names from the Anglosphere like America’s UN ambassador, Samantha Powers (she was not a witness but has no trouble filling pages at great length about the vast lessons to be learned). 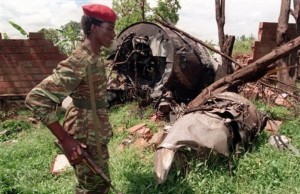 On the night of the 6th, Kagame, by all accounts, ordered his Rwandan Patriotic Forces (RPF) into attack that very same night, though there was a peace accord in place, and they never ceased to attack until they had conquered and could dictate the narrative of events with the assistance of close advisors Clinton and Blair. He ordered the attack despite the fact his counterparts in the Rwandan Army pledged to maintain the Arusha Accord (the peace agreement providing for political power sharing and democratic process). By the by, an offensive such as that cannot be undertaken on short notice, it has to be prepared. The RPF was prepared on April 6th.

For those close to events in 1994 and who have shared their memories and thoughts, one very important individual has been somewhat ignored, Captain Amadou Deme, the Senegalese officer (former paratrooper and combat veteran). Captain Deme did African and UN service in Rwanda from before the celebrated UNAMIR mission and in the years following the tragedy. His work is highly appreciated by his peers, he rescued many people, came close to death himself and lost close friends, all in the effort to prevent the bloody fighting and murder in Rwanda.

He has written a book and sometimes been interviewed** but oddly ignored by the designated record keepers. Perhaps this is explained by the fact he is a francophone African, an inappropriate profile for the mainstream media (not NATO, not trusted?).

Captain Deme’s book, “Witness to Genocide. The True Story of the Failure of the United Nations Mission to Rwanda (UNAMIR) 1994,” is a close up view from someone who was out on the streets of a war-torn city and interacting with all the major players who impacted for good or ill on those violent scenes.

About his credentials, remember it was Captain Deme who met, and traveled in search of weapons caches, with the legendary “informant” JeanPierre (Abu Bakr) whose importance has been so wildly misrepresented by the American journalist Philip Gourevitch, Kagame’s Boswell. Gourevitch never met Jean Pierre. Deme did. General Dallaire, who has written and spoken about Jean Pierre, never met him. Captain Deme, a respected intelligence officer of UNAMIR, did meet the “informant” and found him dubious, a gun-runner and story-teller with friends in both camps (interview on The Taylor Report). So many commentators avoid the direct account of Deme. Is it because he disrupts their cut-and-paste version of 1994 Rwanda?

Drawing on the book and interviews let’s review for this occasion Captain Amadou Deme’s account of the military/political circumstances before and during the April 6th pre-meditated (conspiratorial) attack on the President’s plane. Remembering, too, that on that evening Rwandans were alive, at peace, and anticipating the installation of an interim government and the advent of elections.

“He (Habyarimana) was my enemy, why should I care what happened to him?”,later declared Kagame, a signatory of the Arusha peace accords, speaking on British television.

CAPTAIN DEME/Back ground of the 6th:

“I was the Military Intelligence Officer (MIO) for the United Nations General Romeo Dallaire before, during and after the “Rwandan genocide”…My job with the United Nations Mission for Rwanda (UNAMIR) was to provide Gen. Dallaire with information or “intelligence,” from Rwandan sources including the informant “Jean Pierre” about whom so much has been written as the source for the infamous “genocide fax” that others have interpreted as predicting the mass-violence that later swept Rwanda as being a plan put in place by the former Rwandan Government and Rwandan Government Forces (RGF). Mass-violence did erupt after the plane of Rwandan President Habyarimana was shot down April 6, 1994, but it was not part of a plan described in the information from “Jean Pierre,” nor was the killing of Belgian soldiers soon after.”

REACTION TO NEWS OF THE ASSASSINATION:

“As soon as we (military observers mainly) could be gathered, there was not a single individual among us who doubted that this was an action by RPF… people gathered information from the airport and the vicinity of the crash site. They began to recount the facts, events and signs that led to the conclusion that the shooting down of the President’s plane and the well-planned military assault of the RPF that began immediately after of steps of what they had seen so far,

* The preparation for hostilities by RPF to build up forces, logistics, stocks, etc.

*The bringing in of troops, the information of massive weapons and ammunition from Uganda.

*The movement of troops… likely from the Ugandan NRA, the physical observation of offensive preparation by aerial reconnaissance even from the Force Commander (Dallaire) and me during one of those missions by helicopter.

*The smuggling in of troops and weapons and ammunition in those convoys to and from Mulindi (to the RPF battalion stationed in Kigali as part of Arusha agreement. P.T.)

*The absolute lack of freedom to prevent those convoys with their nonsense excuse of getting wood from Mulindi.

*Lack of liberty of movement by our observers in the RPF zone.

*Information from government forces about eventual preparation of RPF for offensive war.

*Open threat of Major Paul Kagame, who said to the Force Commander (Dallaire) on April 2 that something was underway, and once it would start, it would be a cataclysm that nobody could stop…He mentioned before, several times, that perhaps there would be a situation where somebody would have to come out a winner.

*Defensive preparation [by the RPF, ed] at the CND compound [in Kigali, ed] over several months.

*Worries of foreign military expatriates concerning the potential existence of missile launchers at the CND headquarters [of the RPF,ed].

*Information from some of the local population, who started to book hotel rooms and even to move into the hotels for safety.

*Moving of families by some RPF officials.

*The forbidding of flying near the CND that obliged the Presidential plane and other flights to only have a unique itinerary of final approach while landing at Kanombe airport.

*The withdrawal of the RPF liaison officer with an excuse of going to Uganda to visit family only three days before the downing of the plane.”

These were matters known to Captain Deme on and around the 6th of April. Not long after he was one of the 1st UN officers to visit and photograph the crash site and in following months he became a member of a UN war crimes investigation team, headed by Michael Hourigan and Jim Lyons, that learned more details and interviewed witnesses. The accumulated evidence pointed to General/President Paul Kagame. At a certain time the work and results was stopped and sealed. Subject for another article, based on the book “Witness to Genocide: The True Story of the Failure of the UN Mission in Rwanda (UNAMIR)1994” by Captain Amadou Deme.

* Phil Taylor was a Defense investigator with the UN International Criminal Tribunal for Rwanda. He is a broadcaster at The Taylor Report, CIUT Toronto, and contributor to the book Justice Belied, The Unbalanced Scales of International Criminal Justice (Baraka Books, 2014). Phil Taylor also wrote the Preface to Dying to Live, A Rwandan Family’s Five-Year Flight Across the Congo (Baraka Books, 2013).

** For a full interview with Amadou Deme, please see Rwanda and the New Scramble for Africa.