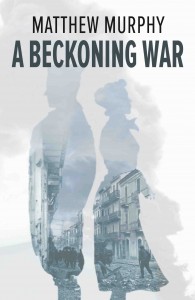 (26 June 2017, Montreal) — Today, Baraka Books is pleased to announce A Beckoning War by Matthew Murphy has been named a winner in the 19th annual Foreword INDIES Book of the Year Awards.

Foreword Reviews, a media company focusing on independently published books, announced the winners of its INDIES Book of the Year Awards today during the American Library Association’s Annual Conference in Chicago. The awards recognize the best books published in 2016 from small, indie, and university presses, as well as self-published authors. You can view all of the winners at here.

“Awarding the INDIES is always the highlight of our year, when we get to honor talented authors and great books that are ordinarily overlooked by mainstream publications,” said Howard Lovy, Foreword Reviews’ executive editor. “While they don’t have major PR machine or corporate budgets, these indie publishers are passionate about what they do, take chances, and produce a wide range of thought-provoking books.”

“The Foreword INDIES award for his first novel confirms the observations in the many glowing reviews Matt Murphy has received for his first novel,” declared Robin Philpot, Publisher of Baraka Books. “Congratulations Matt. People are looking forward now to your second novel.”

Over 2,000 entries were submitted in 66 categories, with Foreword’s editors choosing the finalists, and a panel of over 150 librarians and booksellers acting as judges to pick the winners.