Barack Obama and the Jim Crow Media by Ishmael Reed was launched in Montreal on April 14 before a crowd of some 120 people — some were turned away because the Saint-Denis café was too packed. Before Ishmael Reed addressed the crowd, Montreal rapper Jenny Salgado made a very moving presentation of Michèle Lalonde’s famous 1960s poem Speak White. Jenny Salgado.

Another launch was held at the United Steelworkers Hall in Toronto on April 16 before some 100 people. Ishmael Reed was introduced by Phil Taylor of the Taylor Report and by prize winning author, Professor George Elliott Clark. The launch was organized by the excellent Toronto bookstore A Different Booklist, 746 Bathurst Street, Toronto (416) 538-0889. 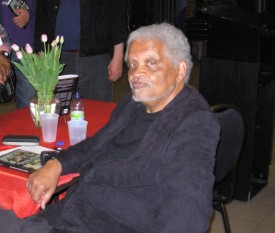 See interview with Ishmael Reed in the Montreal Mirror, April 8-14.

Praise for Barack Obama and the Jim Crow Media

“Amazed at the many fronts on which [Ishmael Reed] has gathered little-reported facts…. I hope his book will lead to more journalistic self-reflection and intellectual honesty. ” — Werner Sollors, Professor of English Literature and of African and African American Studies, Harvard University

“With Ishmael Reed, the most persistent myths and prejudice crumble under powerful unrelenting jabs and razor-sharp insight.” — Le Devoir, Montreal

“The brightest contributor to American satire since Mark Twain.” — The Nation

Ishmael Reed taught at the University of California (Berkeley) for thirty-five years, as well as at Harvard, Yale and Dartmouth. He is a member of Harvard’s Signet Society and Yale’s Calhoun Society.

For Ishmael Reed, Barack Obama is being tormented, like Michelangelo’s St. Anthony, but by modern reincarnations of the demonic spirits used to break slaves. They were the “Nigger Breakers”—men like Edward Covey, who was handed the job of breaking Frederick Douglass. Now the media play that role, with their whip being a custom-made yardstick that they never used to measure other politicians.

“Isn’t it ironic,” writes Reed: “A media that scolded the Jim Crow South in the 1960s now finds itself hosting the bird…. In terms of its attempt to build a media that “looks like America,” the media are as white as a KKK picnic.”

Ishmael Reed turns his penetrating gaze on Barack Obama’s election and first year in power—establishing himself as the conscience of a country that was once moved by Martin Luther King’s dream. If, as claimed by some, the United States has gotten beyond race, then how should it really be?