R2P may be on last legs, says Max Forte, author of SLOUCHING TOWARDS SIRTE

R2P may be on last legs, says Max Forte, author of SLOUCHING TOWARDS SIRTE

At well-attended launches in Hamilton and Toronto, Max Forte, author of Slouching Towards Sirte, NATO’s War on Libya and Africa, suggested that the  UN norm known as “Responsibility to Protect” may be on its last legs because of the massive loss of lives and destruction that NATO inflicted upon Libya and the Libyan people in the 2011 war.

Invited to speak about The Adventures of Liberal Humanitarianism in Africa: Bombing Libya to Freedom in Hamilton and Toronto on Tuesday on June 18 & 19, Forte carefully dismantled each one of the arguments used to justify the war on Libya, regime change, and the murder of Mouammar Gaddafi.

The biggest lie, according to Max Forte, is the racist one about plane-loads of African mercenaries being brought in to defend the Libyan government. That argument was used to impose the no-fly zone, which in fact is a declaration of war. Since October 21, 2011 it has become evident that not a single black African mercenary was present in Libya during the war. Worse yet, the photos and videos used showed black Libyan workers wearing construction hardhats and carrying two-by-fours. According to Forte, the lie about the mercenaries is the equivalent of the US lie in the Iraq war about Weapons of Mass Destruction, adding that Obama’s rush to war on Libya was much faster than George W. Bush’s in Iraq.

Max Forte then dissected the different motivations for war in Western countries and, more specifically, the despicable role played by so-called humanitarians who called for using the “responsibility to protect” or R2P norm. When humanitarians shout that we have to do something, that we have to intervene, since they have no army to muster, they really mean that they want the US and NATO to intervene. And the result is always that the big and powerful attack the smaller and weaker.They do not attack equals, on those weaker than them.

“The result is a relationship of inequality,” he pointed out, “a relationship of subordination.” Moreover, that is what now characterizes the new militarized relationship between the United States and African countries, especially with the expansion of AFRICOM. Whereas in the past the United States’ so-called aid, such as the distribution of rice, was done by young people in the Peace Corps or by people working for the civilian USAID, now it is done by soldiers in uniform. Essentially, said Max Forte, when it is uniformed soldiers who do the work, “they are saying today we are giving out rice, but don’t cross us.” There is an inherent threat in the omnipresence of military personnel. 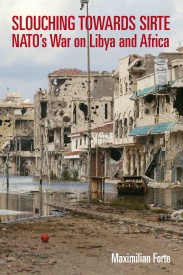 Because  “humanitarian intervention” in Libya has been a disaster, nobody wants to talk about it now. But it also has wounded the norm of R2P. Even the most ardent supporters of R2P who dubbed the war on Libya “the high-water mark” shy away from talking about it.

In Slouching Towards Sirte Forte notes how the Liberal humanitarians called on Obama, Sarkozy, and NATO saying “we can’t stand idly by.” After methodically taking apart every single argument justifying war on Libya and showing what the real motives were, Forte concluded his book as follows, “The next time that empire comes calling in the name of human rights please be found standing idly by.”

Max Forte is a Professor of Anthropology at Concordia University in Montreal, Québec.

His book is available in all formats on this website, at all good bookstores, and online vendors.