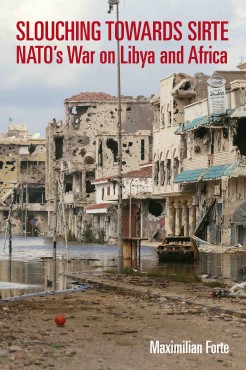 NATO's War on Libya and Africa

“Forte’s  book is a must-read for anyone seriously interested in understanding the motives and consequences of the West’s onslaught against Libya and African development.”  Dan Glazebrook, Ceasefire Magazine

NATO’s war in Libya was proclaimed as a humanitarian intervention—bombing in the name of “saving lives.” Attempts at diplomacy were stifled. Peace talks were subverted. Libya was barred from representing itself at the UN, where shadowy NGOs and “human rights” groups held full sway in propagating exaggerations, outright falsehoods, and racial fear mongering that served to sanction atrocities and ethnic cleansing in the name of democracy. The rush to war was far speedier than Bush’s invasion of Iraq.

Max Forte has scrutinized the documentary history from before, during, and after the war. He argues that the war on Libya was not about human rights, nor entirely about oil, but about a larger process of militarizing U.S. relations with Africa. The development of the Pentagon’s Africa Command, or AFRICOM, was in fierce competition with Pan-Africanist initiatives such as those spearheaded by Muammar Gaddafi. 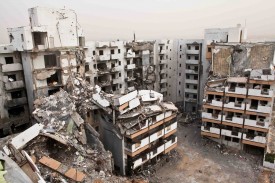 Far from the success NATO boasts about or the “high watermark” proclaimed by proponents of the “Responsibility to Protect,” this war has left the once prosperous, independent and defiant Libya in ruin, dependency and prolonged civil strife.

“Desperate to finally be seen as the liberators of Arabs, rescuing poor victims with the finest of American exports (human rights), some would understandably feel compelled to exploit the suffering of others (residents fleeing Sirte) and turn that into something worthy of celebration. This is an example of the abduction process at the centre of Western, liberal humanitarianism: it can only function by first directly or indirectly creating the suffering of others, and by then seeing every hand as an outstretched hand, pleading or welcoming. We see (or imagine) helpless others, gobbling morsels of food that we hand them, brown mouths chugging down water from our plastic bottles, and we feel accomplished. Our moral might is reaffirmed by the physical plight of others. Clearly, the humanitarian relation is not a relation between equals. We are not our “brothers’ keepers” then, but rather we are more like animal keepers. Bombing for us is really just an animal management technology, and our relationship to the world remains a zoological one.” (Slouching Towards Sirte, p. 97.

“(Max Forte’s) book is a powerful argument against the humanitarian myth promoted by western powers to mask the imposition of their dominance on other societies.” – Damir Mirkovic, Emeritus Professor of Sociology, Brandon University

“Thoroughly researched and impeccably referenced, (Slouching Towards Sirte) tells the story of the real aims and real consequences of the war on Libya in its historical perspective. Its author, Maximilian Forte, is well placed to do so. A professor of social anthropology in Montreal, much of his writing and research in recent years has been dedicated to the new imperialism, and especially its ‘humanitarian’ cover. He was amongst the first to really expose violent racism within the Libyan insurrection, and its role in facilitating NATO’s goals in Africa, and has provided consistently excellent analyses of the media coverage surrounding the conflict.”  Dan Glazebrook, Ceasefire Magazine

Slouching Towards Sirte is “a meticulously documented study in hypocrisy: that of the U.S. elite, of the Gulf ruling classes who have lately

welded their agenda directly onto that of the United States, and of the liberal bombardiers who emerged in the crucible of ‘humanitarian’ wars of the 1990s only to re-emerge as cheerleaders of the destruction of another Arab country in 2011.(…) Forte is able to bring to bear evidence that NATO carried out extensive war crimes during the ‘liberation’ of Sirte, and the evidence is impeccable…” Max Ajl, Monthly Review, April 2013 (55-59)

“Slouching Towards Sirte is a penetrating critique, not only of the NATO intervention in Libya, but of the concept of humanitarian intervention and imperialism in our time. It is the definitive treatment of NATO’s war on Libya. It is difficult to imagine it will be surpassed.” Stephen Gowans, What’s Left, Read More

“Forte’s allegations that NATO’s war was manufactured by liberal interventionists and “iPad imperialists” whose agenda to disrupt African independence and execute regime change under the “fig leaf” of saving lives are chilling—and persuasive. So too is the timeline of events between the start of the protests and the propagandist hysteria promulgated online. Even though Forte couches descriptions of Gaddafi in amorphous, guarded language, he isn’t an apologist. In this provocative and unabashedly direct book, Forte speaks truth to power.” ForeWord Reviews, January 4, 2013, read full review…

The Public Archive identified Slouching Towards Sirte as one of 10 Books for 2012 on its Black Radical Reading List.

Maximilian C. Forte is an Associate Professor in the Department of Sociology and Anthropology at Concordia University in Montréal, Québec. He 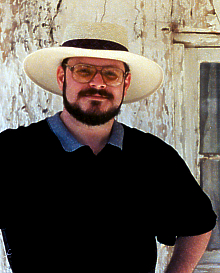 teaches courses in the field of political anthropology dealing with “the new imperialism,” Indigenous resistance movements and philosophies, theories and histories of colonialism, and critiques of the mass media. Max is a founding member of Anthropologists for Justice and Peace. He writes regularly for the Zero Anthropology Project, CounterPunch, and was formerly a columnist for Al Jazeera Arabic. 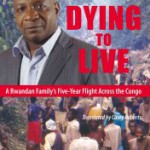