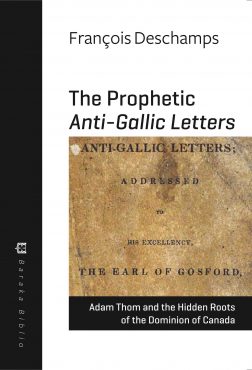 Adam Thom and the Hidden Roots of the Dominion of Canada

The Anti-Gallic Letters by Adam Thom were published in book form in 1836. They are based on Thom’s editorials in the Montreal Herald written under the nom de plume “Camillus” between September 1835 and January 1836. They were never reprinted despite the importance of the people for whom Adam Thom was the public voice. These people comprised the Executive Committee of the powerful Constitutional Association of Montreal, including the president George Moffatt and Peter McGill. Adam Thom was also co-author of the Durham Report that laid the foundations for the Act of Union and the BNA Act of 1867 creating The Dominion of Canada. 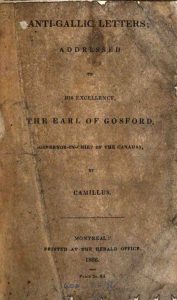 More than an anti-French, anti-Republican tract, The Anti-Gallic Letters, though largely ignored by historians, are crucial to understanding how British North America mutated into The Dominion of Canada in 1867. The Anti-Gallic Letters have been erroneously characterized as representative of a minor discord between the Melbourne cabinet in London and a select group of Montreal merchants, bankers, and gentlemen in the Tory oligarchy. In fact, they reveal the total disagreement among people of British culture and background on how to exercise power in the colonies of Canada and to protect the interests of the British Empire.

Westminster was inspired by the 1832 Reform Bill. The Melbourne cabinet believed in a gradual and harmonious transfer of British parliamentary values and institutions to a majority group who had a different culture and background and another widely-used international language. This majority was what Governor Gosford described as “the great body of people” in his 1835 Throne speech read in French. Yet the Montreal Tory Oligarchy, stirred by fear and bravado, anticiapted the worst, even though they defended the same British imperial world mission.  For them, Montreal was to be the hub of the British North America that was developing, a competitor of New York. They brandished the spectre of the British Empire being dismembered, either by a French Republic arising in the St. Lawrence Valley or the annexation of Upper and Lower Canada by the powerful American Republic. This threat justified in turn their own threats to take up arms to make Downing Street change its course.

François Deschamps shows that they succeeded across the board. First in 1837 came the brutal repression of the Patriotes in Lower Canada and the Reformers in Upper Canada, then the Durham Report and the Act of Union of 1840, and finally the 1867 BNA Act creating the Dominion of Canada. Thence the word Prophetic in the title of this new edition of The Anti-Gallic Letters.

Now reprinted with Deschamps’s fascinating presentation and notes, the Anti-Gallic Letters provide new insight to Canadian—and North American—history as Canada prepares to mark the 150th anniversary of the Dominion of Canada in 2017.

Adam Thom (1802-1890) was born in Scotland and immigrated to Montreal in 1832. Appointed editor of the Montreal Herald in January 1835, he led the journalistic assault on the vast French-speaking Canadien majority and on the British government’s “conciliatory”  policy towards this majority leading up to the rebellions of 1837-1838. Under the nom de plume of “Camillus” borrowed from the Sack of Rome by the Gauls, he wrote the Anti-Gallic Letters to Governor General Lord Gosford published in the Herald and in book form in 1836. Thom helped draft the Durham Report of 1839. A lawyer, Thom was appointed to a judicial position in Red River (now Manitoba) in 1839 where he came into conflict with the French-speaking Métis, including Louis Riel, Sr. He returned permanently to the UK in 1854.