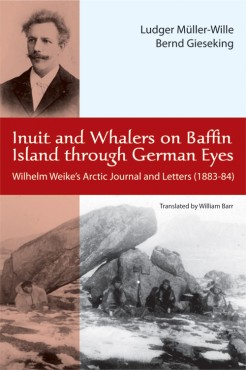 Inuit and Whalers on Baffin Island through German Eyes

Wilhelm Weike, a 23-year old handyman from Minden/Germany, accidentally found himself spending the year of 1883-84 among Inuit and wintering with whalers on Baffin Island in the Canadian Arctic. The fledgling scientist Franz Boas (1858-1942), later the eminent cultural anthropologist, hired Weike to attend to and assist him in his geographical and ethnological research following the first Polar Year of 1882-83. Weike’s journal is a fascinating text and an exceptional piece of working-class literature.

Ludger Müller-Wille and Bernd Gieseking have edited and annotated Weike’s journal extensively. They present his biography and highlight his observations and his contributions to Boas’s scientific work.

William Barr of the Arctic Institute of North America (University of Calgary) translated this book from the German.

“Wilhelm Weike’s journal is an interesting and unique account of an early Arctic expedition. In a genre filled with the writings of scientists and expedition leaders, Weike’s working-class account provides a fresh voice and perspective. (….) it serves as a valuable source on polar expeditionary life in the 19th century.” Christina Folke Ax, Polar Research 2012

“Weike’s journal and letters do not stand alone. Introductory material and extensive background on both Boas and Weike and on the Arctic during the period add to and amplify the first-person account. Inuit and Whalers on Baffin Island through German Eyes greatly enriches our picture of the intermingling of indigenous and European cultures in the late nineteenth-century Arctic.” Pamela Grath, Foreword Reviews Nov. 18, 2011

“This beautifully edited journal by Wilhelm Weike not only complements that of the great Franz Boas, it is an invaluable historical source on intercultural relations between Inuit, over-wintering whalers, and their German observers.” — Yvon Csonka, anthropologist, Neuchâtel, Switzerland

“This text gives an intriguing glimpse into a young European man’s life among the Inuit. Weike’s journal is a unique contribution to the history of culture contact as an integral part of social sciences.” — Susanne Dybbroe, anthropologist, Aarhus University, Denmark

“With this book Wilhelm Weike takes his rightful place alongside Franz Boas as an astute observer of Inuit life. His narrative places a common man’s perspective on the events of a single year that shaped Boas’s career, and helps us in contextualizing the work of the scientist.” — Kenn Harper, historian / entrepreneur, Iqaluit (Baffin Island), Nunavut, Canada

“Reading Wilhelm Weike’s journal allows us to imagine how much the master-servant bond shaped Franz Boas’ relationship with the Inuit and the strong dependence on his servant.” — Jens Dahl, anthropologist, University of Copenhagen, Denmark

Bernd Gieseking, comedian and writer, hails, like Weike and Boas, from Minden, Germany. His dramatization of Weike’s and Boas’s arctic sojourn, The Colour of Water, premiered in 2010. He lives in Germany.

William Barr (Arctic Institute of North America, University of Calgary) has translated books from French, German, and Russian on the Arctic and Antarctic, including the journals of Franz Boas.