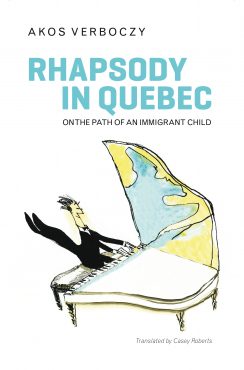 On the Path of an Immigrant Child

Born in Hungary in 1975, Akos Verboczy moved to Montreal, Quebec at the age of 11 with his sister and mother, an esthetician, who learned that in Canada women were willing to pay a fortune ($20) to have their leg hair brutally ripped out.

His story begins in Hungary, where at the age of nine he learned that he was a Jew too—”half-Jew” to be more accurate. Unlike some who emigrated from Eastern Europe, Verboczy has no particularly beefs about life “behind the iron curtain.” He lands in Montreal as James Brown’s Living in America plays and Rocky knocks the Russian communist boxer flat in Rocky IV. The good guys he had learned to like were now officially the bad guys. Once in “America” he discovers that he will be going to French school—after all it is Québec. But then he learns that Canada is the only “place on the planet where there’s no prestige in speaking French.”

In fifty vignettes and tales that belie all the clichés about immigration to Québec, he depicts the experience of embracing a culture and a people who are constantly obliged to reaffirm their right to exist. A keen young fencer, he identifies with Alexander Dumas’s d’Artagnan, the outsider who insists that his “heart is musketeer” though his dress is not.

At a time when identity politics are at the fore, Verboczy’s observations are both enlightening and witty, comforting and yet challenging, and humorous. He does not hesitate to discuss thorny political issues such as language laws, anti-Semitism, multiculturalism, values, Québec sovereignty, and more. Rhapsody in Quebec is an important contribution to public debate wherever immigration is an issue, be it Quebec, Canada, United States or on other continents.

Read an excerpt on Quebec Reads

Akos Verbczy has a degree in Political Science from the Université du Québec à Montréal. Hee worked for several years in grass-roots organizations aimed at involving young people involved in public and democratic activities. Elected to Montreal’s largest school board, the Commission scolaire de Montréal, he chaired the intercultural relations committee for nine years. From 2012 to 2014, he was political attaché to Québec’s Minister responsible for Immigration and Cultural Communities and application of the French Language Charter. Rhapsody in Quebec is his first book.

Casey Roberts is a literary translator won the John Glassco Prize awarded by the Canadian Literary Translators Association for his translation of the YA novel Break Away, Jessie on My Mind. His other literary translations include Rebel Priest in the Time of Tyrants. He lives in Montreal.

Toula Drimonis is a Montreal-based freelance writer, editor, and award-winning columnist and a frequent guest on English and French-language radio and television.

“This intelligent, funny, often ironic, and sometimes frustrating book will interest readers who want a sharp view of identity and language politics in Canada.” Publishers Weekly

“The book is sophisticated and very accessible, awash with culture and cultural references, some familiar and low-brow… The author has a knack for turning a situation on its head, helping readers consider an issue from a new perspective. … an astute and witty contribution…” Peter McCambridge, Quebec Reads.

“His story is eloquent, inspired and inspiring, and both charming and witty, while speaking volumes to our identity.” Editorial choice, Les Libraires

“A tale sparkling with irony and self-mockery … A much needed testimony that eschews drama and pathos.” Nathalie Collard, La Presse

Named one of the top ten nonfiction books of 2016 by La Presse.