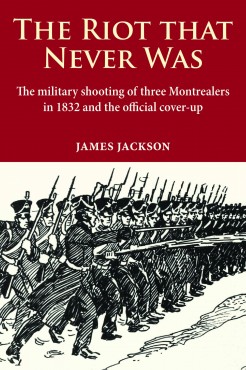 The Riot that Never Was

“The Riot that Never Was provides a striking portrayal of mid-nineteenth-century Montreal: the vigorous debates that raged in Patriote and Conservative newspapers, the hot fighting during elections that often degenerated into open conflict between the Canadiens, the Irish, and the English, and the recurrent epidemics like the cholera epidemic in 1832. (…) Jackson brilliantly establishes the exact course of events on May 21.”
— Charles Turgeon, Cahiers d’Histoire

As a by-election eventually won by Irish immigrant and newspaper editor Daniel Tracey drew to a close in May 1832, magistrates supporting his opponent, loyalist Stanley Bagg, called in the British troops from the local garrison. Ordered to open fire on a supposed mob, the troops killed three innocent bystanders following what has been qualified ever since as a riot. James Jackson establishes that the riot simply never happened and that there was no mob when soldiers opened fire.

His proof is corroborated by affidavits presented to a packed grand jury that exonerated the soldiers and officers and the magistrates who called in the troops. The grand jury comprised a majority of recently arrived English-speaking Protestant farmers even though the three victims were French Canadian and Catholic. Most troubling is the fact that historians have not questioned the official story.

In this historical “whodunit,” James Jackson is a one-man investigative commission, combining the moral indignation of an Émile Zola and the writing talent and historical perspective of a Pierre Berton. Although the names of François Languedoc, Pierre Billet and Casimir Chauvin have been forgotten, their story deserves to be known.

This fascinating, methodical investigation into a little-known tragedy proves that truth can prevail 180 years after the events.

“The title of this excellent study reveals the formidable problem addressed: prove that no riot was taking place on St. James Street in Montreal when the British troops opened fire. (…) Jackson brilliantly establishes the exact course of events on May 21. (…) This work is definitely an excellent opportunity to revisit that feverish period in the history of democracy in Canada.”
– Charles Turgeon, Cahiers d’histoire, Vol. XXVVIII, No. 2, Winter 2010

“In May of 1932, events related to a by-election pitting a Irish-born candidate over the English party candidate in Montreal, Canada, that led to the deaths of three French Canadian men at the hands of British regulars has long been termed a riot by generations of historians. This book’s reconstruction of events, based on the proceedings of an investigation conducted by the House Assembly of the Province of Lower-Canada, contemporary news accounts, and the voting pollbook, overturns that assessment and concludes that the deaths of François Languedoc, Pierre Billet, and Casimir Chauvin were completely unjustified and that, in fact, there never was a riot that day in Montreal.”
– (Annotation ©2010 Book News Inc. Portland, OR)

James Jackson holds a DPhil from Oxford University. He taught French and Quebec Literature and History for 25 years at Trinity College Dublin. Twice elected president of the Association for Canadian Studies in Ireland, James Jackson now lives in Montreal.

Getting Away With Murder – Rover Arts