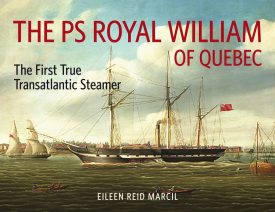 The PS Royal William of Quebec

World trade was revolutionized in the 19th century when ships went from sail to steam. Crossing the Atlantic under steam was clearly an engineering and navigating feat to be celebrated.

A controversy thus developed about which was the first steamship to make the crossing, who built it, and where. Several ships, including the Great Western and the Sirius from the U.S. and the Curaçao from Holland, have claimed the title.

The truth is that the Paddle Steamer Royal William, built at the Campbell and Black shipyard in the Port of Quebec, earned the title when it steamed across the Atlantic from Pictou, Nova Scotia, to Portsmouth England in 1833. 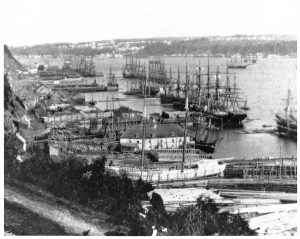 With this book she has laid the controversy to rest, proving beyond doubt that the PS Royal William was the first vessel to span the Atlantic under steam, the First True Transatlantic Steamer. 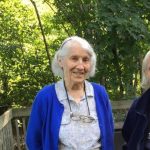 Eileen Reid Marcil, now 98 years old, is a maritime historian. Her previous books include The Charley-man: A History of Wooden Shipbuilding at Quebec 1763-1893 and Tall Ships and Tankers: The History of the Davie Shipbuilders. Ms Marcil received her doctorate from Université Laval on her 65th birthday. Her thesis was entitled Shipbuilding at Quebec, 1763 ‑ 1893: The Square Rigger Trade. She has devoted herself to making known Quebec’s great shipbuilding history ever since. She now lives in Montreal.

The Canadian Nautical Research Society gave an “Honourable Mention” to the PS Royal William of Quebec in the 2021 Keith Matthews Best Book Award.

“Wide ranging scholarship to put it mildly on this vessel … The book is well illustrated, and attractively packaged. The story is told well… This is a good-looking, well-produced book. I very much enjoyed the plethora of visuals included by the author. It tells a good story. The main point of the book is to address the controversy over which steamship deserves the title: ‘first true transatlantic steamer.’ We must also recognize the work of the publisher, Baraka Books of Montreal, for the production values.”

“The information [Eileen Reid Marcil] presents about steamers and the people involved in their history is fascinating, while the many beautiful watercolours, photographs, and illustrations make her book a visual pleasure.” Beverly Tallon, Canada’s History