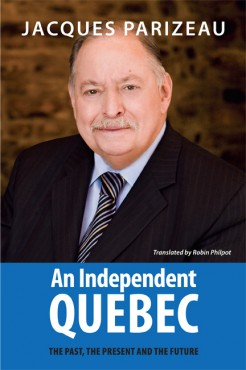 The Past, the Present, and the Future

“I am very pleased to see this book published in English,” declared Jacques Parizeau. “It has always been my belief that the best way for Quebecers and English-speaking Canadians to reach an understanding that is satisfactory for all is through direct communication. Though we may not agree on the best course to take, we will at least understand and hopefully respect each other’s choices.”

Drawing on his rich experience in politics, public service, and education, Jacques Parizeau explains how the idea of an independent Quebec took root and evolved and reviews Quebec’s current economic, political, social, and cultural situation. No stones are left unturned: Why become independent? What is the role of the state and how should it be administered in a global economy? What new challenges face Quebec sovereigntists; their English Canadian counterparts; and their neighbours in the United States? Readers will better understand the cause Jacques Parizeau has defended with dignity for forty years and also why he is one of Quebec’s most respected political leaders.

Praise for An Independent Quebec

“On all issues, Jacques Parizeau has interesting things to say. (…) Overall, it is the book of a leading civil servant, a major actor in the Quiet Revolution, and an extraordinary politician. His ideas, whether we share them or not, deserve our respect. There are too many mediocre politicians for us not to welcome the idea that a politician is also a thinker.” — Alain Dubuc, La Presse

“What Parizeau brilliantly illustrates is that today ‘no country is too small to develop as long as it is part of large trade space or market.’ ” — Louis Cornellier, Le Devoir.

Jacques Parizeau holds a PhD in economics from the London School of Economics and was economic advisor to Quebec premiers Lesage, Johnson, and Bertrand. Elected to the Quebec National Assembly in 1976, he was Minister of Finance from 1976 through 1984. He was elected premier of Quebec in 1994 and led the Yes committee in the 1995 referendum. He is honorary professor of economics at HEC Montréal.

Robin Philpot, who translated this book, is a Montreal writer, translator, and publisher.

The Question of Separatism, Quebec and the Struggle over Sovereignty by Jane Jacobs