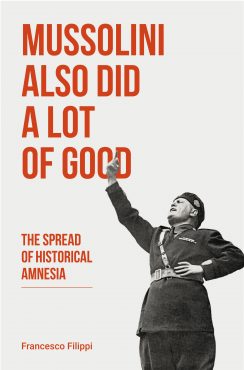 Mussolini Also Did A Lot of Good

The Spread of Historical Amnesia

“an antidote to all the nonsense still circulating about fascism…. Filippi is almost surgical in the way he reestablishes the context.” La Repubblica Book of the Month

“In the existing climate, Francesco Filippi’s scalpel is of utmost importance” Le Monde

“Francesco Filippi’s book is very timely and relevant … a lesson on a past that simply doesn’t go away.” Corriere Della Sera

Surgically, but with wit, Francesco Filippi demolishes each and every myth that has taken root about Mussolini and fascism in an uplifting handbook for political and intellectual self-defense. No stones are left unturned, including the colonial devastation of Libya and Ethiopia.

Legend would have it that Mussolini put roofs over Italians’ heads, developed the economy, had trains running on time, stood up for justice and against the mafia, protected the Jews from Nazi Germany, was a feminist, and put Italy on the map as a respected power. The founder of fascism’s only mistake was allying with Hitler.

Though this is entirely false, it didn’t prevent Antonio Tahani, president of the European Union, from declaring in 2019 that “if we must be honest, he [Mussolini] did positive things to realize infrastructures … he reclaimed many parts of our Italy.” In fact, only 6 percent of the improvements referred to were done during the 21 years of fascist rule.

Though written first for Italians, this book is relevant and timely for North Americans. Through a study of Mussolini and Italy, Filippi shows how such legends are built on webs of lie, manipulation of History, and constant uncontested repetition, explaining at the same time why so many people fall victim to the propaganda. 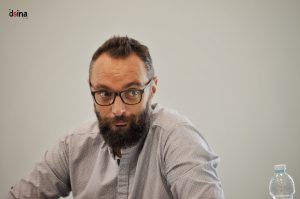 Francesco Filippi is a historian of mentalities and an educator who has specialized in the relationship between memory and the present.  Mussolini Also Did A Lot of Good Things is his first book to appear in English. He lives in Trento, Italy.

John Irving is a writer and translator with  a degree in Italian Language and Literature from the University of Edinburgh. He lives in Bra, Italy.

“Francesco Filippi’s polemic, with its provocative title, Mussolini also Did a Lot of Good: The Spread of Historical Amnesia (Baraka Books, 2021), is such an urgent read—for all of us—Italian or not—right now… chapter by chapter, point by point, Filippi dislodges propaganda with fact, answers mirage with astringent sunlight, and dispels nostalgia with body-counts.” George Elliott Clarke, E.J. Pratt Professor of Canadian Literature at University of Toronto, Read the review Accentì Magazine

“At a time in human history when fake news is part of the daily vernacular, Filippi’s book about an Italian dictator who two generations ago played a similar game seems extraordinarily pertinent.” Agata De Santis, Italocanadese

“Francesco Filippi gives us an intelligent and penetrating account of Fascist Italy … The reputation of Mussolini is egregiously warped by misinformation and falsehoods among his supporters, many of whom were born after he died. The author wrote the book to counter such historical distortion. … We are indebted to Mr. Filippi for his skilled passion in establishing a proper analysis for those who seek to counter the supporters of Mussolini’s tyrannical reign.” Truby Chiaviello, Primo Magazine

“There is a widespread myth, in Italy but not only there, that Benito Mussolini’s regime was not all bad. This myth is backed up by series of oft-repeated claims about the supposed achievements of Italian fascism, and its allegedly mild nature. Francesco Filippi’s direct and trenchant book, a best-seller in Italy, counters these myths with facts, providing a useful and entertaining primer into how to understand the world’s first fascist government and its legacy.” John Foot, Professor of Modern Italian History, University of Bristol