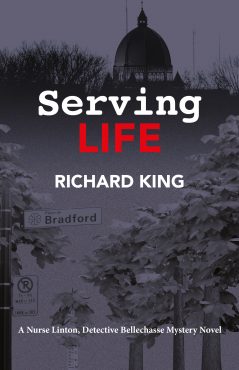 In Serving Life, a mysterious doctor is wandering the halls of the Emergency Department of the Gursky Memorial Hospital, providing medication to patients suffering from dementia. Annie is suspicious of his motives and is determined to identify the man. Her search kicks into high gear when some of the dementia patients die unexpectedly. Gilles is assigned to investigate the murder of a doctor who is in charge of a research lab at the Gursky.

At the same time, a serial killer is stalking the streets of Montreal, killing people apparently at random. Gilles and Annie team up to uncover the clues that link all the crimes and ultimately to solve them.

Richard King is the author of seven mystery novels and two biographies. A former President of the Canadian Booksellers Association and books columnist on CBC, Montreal, King volunteered in the Emergency Department of the Jewish General Hospital for ten years. Serving Life follows on A Stab at Life and Banking on Life.

“One of the key characteristics of good crime fiction writing is to avoid arbitrary coincidences by weaving plausibility into the déroulement of the narrative. King’s writing is deeply rooted in plausibility, so much so that it reads like true crime non-fiction. As he introduces new twists to the plot, he provides strong frameworks around them, reinforcing their believability. … Hommes de Lettres, food connoisseur, bon vivant, humanitarian – Richard King will be missed by all who knew him. Montreal has lost a real Mensch.” Ian Thomas Shaw, Ottawa Review of Books

“King, a lively writer with fine storytelling skills… Readers who know Montreal will recognize neighbourhoods, streets and landmarks in A Stab at Life. Indeed, the city is as much a character as the nurse and the detective.” Susan Schwartz, The Montreal Gazette

“King masterfully uses a slick third-person narrative throughout his novel, shifting from character to character at exactly the right moment, giving readers the best seat in the house. (…) Banking on Life definitely belongs in the long line of Montreal detective novels, with its polished writing and rapid-paced action, all taking place in the well-known nooks and crannies of today’s city.” Sharon Morrisey, Montreal Review of Books

Watch the Homage to Richard King and launch of Serving Life held May 11, 2022.

During this homage/book launch, Elise Moser, a long-time friend of Richard’s, presents and reads from Serving Life. Nurse Margaret Quinsey, who inspired the lead character, talks about Richard King and his book.

Family members including his son Nicholas O’Donnell-King, his brothers Joel and Norman King, and many friends remember many different facets of Richard’s Life