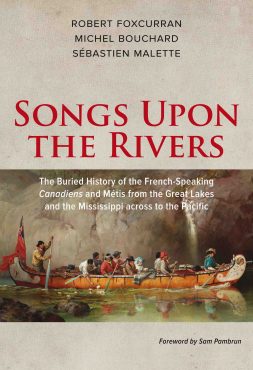 “the hardness of the Indians
they must have embrothered
to be able to settle and have them as conspirators in the rebellion against
contrarious potent churly England.”

Long before the Davy Crocketts, the Daniel Boones and Jim Bridgers, the French had pushed far west and north establishing trade and kin networks across the continent. They founded settlements that would become great cities such as Detroit, Saint Louis, and New Orleans, but their history has been largely buried or relegated to local lore or confined to Quebec.

Foxcurran, Bouchard, and Malette scrutinize primary sources and uncover the alliances, organic links and métissage, or mixing, between early French settlers and voyageurs and the indigenous nations. It began with the founding of New France by Samuel de Champlain in the early 1600s and continued well into the 19th century long after France was no longer a force in North America.

The authors have combined keen and accessible story telling with vintage maps, forgotten documents (such as the little known writings of Alexis de Tocqueville), and old photos or paintings. What they have discovered and now recount will propel the story of the peoples engendered—and still thriving—, their French lingua franca, and their ways of life back into the heart of the narrative of North American history where they belong. 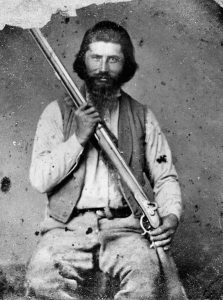 Songs Upon the Rivers also challenges historical orthodoxies. The French-speaking Canadien and Métis, who descended from the French and indigenous nations, developed a hybrid culture invigorated by their close kinship ties with the indigenous peoples across the continent. Yet they kept their French songs and language, which effectively made French the lingua franca of the American and Canadian West well into the 19th century.

Robert Foxcurran is an independent historian who holds undergraduate degrees in French and Japanese studies and a Masters in Business Economics and Business History. He worked for Boeing in various positions including economic analyst and project historian. He lives in Seattle, Washington.

Michel Bouchard is Chair and Professor of Anthropology at the University of Northern British Columbia in Prince George, where he lives. Born and raised in a French-speaking community in Northern Alberta in the shadow of the historical fur economy, he has researched ethnicity and nationalism, particularly in Eastern Europe and Russia. His current concentration is the history of French-speaking populations in Western North America in the 18th and 19th centuries.

Interview with Robert Foxcurran on the New Books Network

“This book challenges American and Canadian narratives about the west which too often tend toward racial and national binaries. By telling the stories of people who lived across ethnic and national boundaries, [the authors] show how historians can use the complications of the past to explode notions of perceived difference in the present day, and in doing so reveal important stories … which have been buried for far too long.” Stephen Hausmann, New Books Network

“The authors set out to redress the erasure of Canadiens (French Canadians) and Métis… from national historical narratives in Canada and the United States. Key strengths of this undertaking include [the book’s] accessible writing style and use of an array of local histories, genealogies, archival images, and maps.” Pacific Northwest Quarterly, Krista Barclay, University of Manitoba

“This book is a major undertaking from three authors who are diverse in their interests and experience. (…) Songs Upon the Rivers is a valuable contribution, illuminating areas of North American Canadien and Métis history that have lingered too long in the shadows of larger national narratives.”Jennifer S.H. Brown, Canada’s History

“Foxcurran, Bouchard, and Malette are serious researchers; they consulted published primary sources (from the Internet) and secondary publications written in both French and English. French traders, the authors argue, were not only indefatigable explorers, they were also brokers of a hybrid culture with indigenous people, which became so strong that it remained dominant on the Pacific Northwest frontier until the middle of the 19th century… the writing, maps, historic images, and excellent index happily extend our understanding of the Canadien and Métis cultures.” Robert C. Carriker, Book Review Editor, Columbia: The Magazine of Northwest History

“Songs Upon the Rivers continues to break through the barriers of sugar-coated and watereddown standard depictions of early Canadian history ensuring that even the most sinister stories of our past will finally be told. With each copy that is sold readers are rejecting the rosy veneer of revisionism and demanding factual honesty as the basis of Canada’s national identity… The book boasts a rich array of unearthed photographs and archived maps giving the reader a vivid visual perspective of the history unfolding on the page.”— Regam Treewater, Alberta Native News

“This new work explores a fascinating and under-explored area of North American civilization: the history of the French ‘Canadiens’ and Métis … not overly ‘jargony’ … it will appeal to anyone with a strong interest in French North America but uncomfortable with academic terminology … refreshing scholarship that adds value, Highly Recommended.” James LaForest, Editor of Voyageur Heritage