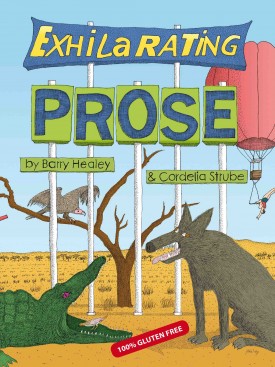 From “Dead Language – the Speaks” (e.g. ad-speak, etc.) to “Re-writing – Again?” and “Rules – Must We Obey?” authors Healey and Strube scrutinize prose in its various forms to reflect on what constitutes distinctive writing, and why.

Included are samples of timeless fiction, astute quotes from celebrated authors, and ruminations on the difficulties of conveying, in prose, the mysteries of the human mind. Those interested in “words in their best order” (Coleridge) will find themselves (dare we say) exhilarated.

Barry Healey is a former television writer. He has written, directed, and produced award-winning short films as well as feature films. He is the author of The Sex Life of the Amoeba.

Cordelia Strube is a playwright and the author of nine critically acclaimed novels, including Alex and Zee, Teaching Pigs to Sing, and Lemon.  Winner of the CBC literary competition, she has been nominated for the Governor General’s Award, the Trillium Book Award, the SmithBooks in Canada First Novel Award and long-listed for The Giller Prize.  A three-time nominee for the ReLit Award, she has been leading writing workshops at Ryerson University since 2000. .