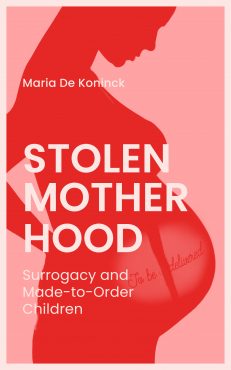 Neither marginal nor secret, contracting surrogate mothers is growing rapidly and is regarded as socially progressive. Yet the “process” is vitiated from the get go, i.e., commissioning a woman to bear, birth, and surrender a baby.

Surrogacy undermines a woman’s human dignity. It makes her an instrument in other people’s project and attacks her equal gender rights. It also objectivizes and denies the rights of the child to be born.

Countries that have adopted a fait accompli approach (simply regulating) have seen people, coached by shrewd international brokers, go “international.” That only means the surrogate mother is from a poor country with lax legislation while the commissioning parents are from a rich one.

By examining the “surrogacy process” and all its implications, Maria De Koninck reaches the conclusion that the best way forward is an international ban on surrogacy.

Maria De Koninck (PhD) was Université Laval’s first Chair of Women’s Studies. Her research has focused on women’s health, including childbirth and reproductive technologies. Her 20 years of international experience include work on HIV-AIDS in West Africa and maternal mortality (notably for WHO). She lives in Quebec City.

Arielle Aaronson is a Montreal translator with degrees from Concordia and McGill. She has translated both fiction and nonfiction for all audiences.

“Some readers may have strong views regarding surrogacy, but after reading this excellent translation of Stolen Motherhood, if they don’t change their minds, they will at least be better informed of its pitfalls.” Maya Khankhoje, Westmountmag.ca

“A human can never be a means to an end. Surrogacy is not socially legitimate, especially considering how much women have fought for centuries—particularly since the 19th century—to be recognized as persons in their own right, capable of performing the same functions as a man and not confined to reproductive roles (childbirth, caregiving, domestic work). (…) Legalizing a practice that subjects some of them to fulfilling a reproductive role for the sole purpose of satisfying sponsors is unacceptable in this context.” (p. 144)