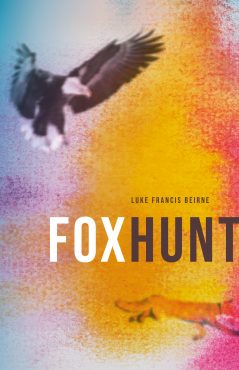 1949: Milne Lowell, a Canadian writer, moves to London from Montreal to edit a magazine dedicated to cultural freedom. His colleagues include Marguerite Allard, a French-Canadian anarchist, Eric Felmore, an American novelist, and Carson Ward, a British poet.

Initially, the group is enthusiastic about the championship of freedom; however, uncertainty grows as unsettling and surprising encounters begin to unfold and the peripheral violence of the Cold War closes in.

Foxhunt is an atmospheric exploration of passivity, loyalty, and literature in times of political upheaval. Firmly entrenched in the literary milieu of the era, it carries the reader through shell-shocked streets with suspense and intrigue.

Luke Francis Beirne was born in Ireland in 1995 and grew up in Western Canada. He lives in Saint John, New Brunswick. He has ghostwritten more than a dozen genre novels. His writing has appeared in outlets such as Honest Ulsterman, Hamilton Arts & Letters, and Strange Horizons, including the award-winning story “Models.” He also holds a Master’s in Cultural Studies & Critical Theory from McMaster University. Foxhunt is his first novel.

“Foxhunt is an atmospheric dive into Cold War intrigue and romance and paranoia in the literary salons of postwar Europe. Spies and turncoats and secretive spin doctors move chess pieces while pushing cash and lies and clashing ideologies. With its beautifully lyrical prose, Foxhunt is an alchemic mix of realpolitik and shadowy noir.” Mark Anthony Jarman

“Foxhunt is wonderfully written and, as already mentioned, is a slow-to-medium-paced read. Hence, it is the type of novel I enjoy reading. Foxhunt is also a very cerebral and well-placed story within the historical context of the beginnings of the Cold War. I highly recommend Foxhunt as a noir-ish literary mystery-intrigue novel.” James Fisher, The Miramichi Reader

FOXHUNT was launched online on Wed May 4. Here is the video of the launch.