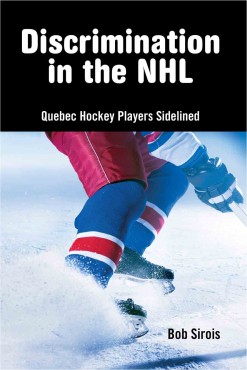 Discrimination In The NHL

Ever since Maurice Richard dazzled hockey fans, fighting his way to hockey’s summits, the issue has festered. NHL veteran Bob Sirois demonstrates that unless Quebec hockey players are superstars they are less likely to be drafted than other Canadians, they can expect shorter careers and less pay, and they are totally excluded from some NHL teams.

Using statistics covering nearly forty years, Sirois shatters tenacious myths such as “Quebecers play poor defensive hockey,” “they are the best goalies,” or “they are smaller.”

As solutions, Sirois proposes an NHL team for Quebec City and a Junior Team Quebec for international events. Bob Sirois’ search for truth can only enhance the great sport of hockey.

“I wrote this book because rarely a day goes by when the Quebec media does not discuss the presence of Quebec hockey players on NHL teams, including Montreal,” writes NHL veteran Bob Sirois in a new epilogue to the updated English version of his best-selling 2009 book Le Québec mis en échec. “But figures show that Quebecers are not alone. At equal or comparable talent, a Quebecer, a European or even an American will not be chosen. Only the very best athletes from those nations will make it to what is in fact the English-Canadian National Hockey League.”

“The Untold Story of Discrimination n Professional Hockey” in Counterpunch

Bob Sirois and Bobby Holik on TSN, OFF THE RECORD with Michael Landsberg

Listen to Jeff Blair talk with Bob Sirois about this book.

“This seems to be strong material and worth serious study by the NHL.”— Stu Hackel, New York Times

“I agree with Bob Sirois’ conclusions. The many statistics are interesting and troubling. With firsthand experience, I can say that it reflects reality exactly.”— Michel Bergeron, Former NHL coach (NY Rangers, Quebec Nordiques)