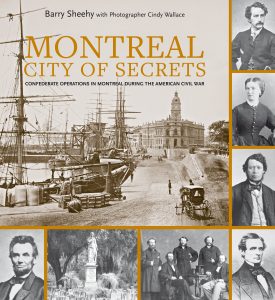 Confederate Operations in Montreal During the American Civil War

“Barry Sheehy lays out the case for the involvement of the Confederates
in a concise and convincing manner showing once and for all that Booth
could not have carried out his plot without their direct help. It is about time.”
– Edward Steers

Montreal hosted the Confederacy’s largest foreign secret service base during the Civil War. Montreal banks and other Canadian financial institutions held a million dollars or more in hard currency or gold to fund clandestine activities. When Jefferson Davis fled the U.S. in 1865, Montreal welcomed him and his family. Overrun with refugees, soldiers of fortune, spies, assassins, bankers and smugglers, Montreal was a pro “Secesh” town.

From the city’s grand hotels, plots of all sorts were hatched, including the infamous St. Albans raid and the Lincoln kidnapping, which mutated into an assassination. Influential British-Canadian bankers joined Confederates as they launched a successful assault on the new “Greenback.” When John Wilkes Booth was shot, a bank draft signed by Montreal banker and future mayor Henry Starnes was found in his coat pocket.

Surprises are not limited to the Confederacy. The level of corruption in the Northern war effort, as suggested by the names registered at the St. Lawrence Hall—Montreal’s finest hotel—is breathtaking. Opposition to Lincoln from both parties ran deeper than is generally acknowledged.

Based on original archival research and his previous books on the Civil War, Barry Sheehy challenges core tenets of the American Civil War narrative. Moreover, his case is greatly reinforced by the many photos taken by internationally celebrated photographer William Notman. A  number of these photos have never been published before.

Barry Sheehy is an award-winning author of six books. His most recent, Savannah: Immortal City, was featured at the prestigious Savannah Book Fair. His writings have appeared in historical and business publications worldwide. Born and raised in Montreal, Barry Sheehy divides his time between Gabarus, Nova Scotia and Savannah, Georgia.

Cindy Wallace is a photographer and an art and photography professor with a Master’s in Fine Arts from Georgia Southern University. Her work has been exhibited throughout the United States. Along with Barry Sheehy, she received the Lieutenant Governor’s Award for Excellence in Research in 2012 for the book Savannah: Brokers, Bankers and bay Lane – Inside the Slave Trade. She lives in Amarillo, Texas.

About Montreal, City of Secrets

“In Montreal, City of Secrets, author Barry Sheehy paints a vivid portrait of a city teeming with spies, smugglers, and assassins. (…) Well-researched, with detailed endnotes and ample black-and-white period photography, the book is a real eye-opener for those who think Canada sat idly by during America’s bloodiest conflict.” Canada’s History

“Sheehy has made an important contribution to our understanding of the American Civil War and how Canada was both involved in and shaped by it. Montreal emerges as a magnet that attracted dreamers, schemers, opportunists, and assassins. The many photographs of people and places help bring the people and places of this fascinating story to life. The book challenges preconceived notions of Abraham Lincoln, Sir John A. Macdonald, the Confederacy, the war, Montreal, and Canada’s birth.”
– John Boyko, author of the bestseller Blood and Daring: How Canada Fought the American Civil War and Forged a Nation

“The lies of American history are surfacing like dead fish on a toxic lake. Statues dedicated to enslavers and massacrers of Indians are coming down. Even in the sacred field of sports, Black football players protest an Anthem, written by a slaveowner and racist, which gloats over the defeat of a Black military contingent that joined the British in their quest for freedom. Teachers and historians who have created generations of bigots with their lies about pro-slavers Hamilton, Jefferson, Washington, are being challenged by multicultural historians.  With his book, Montreal City of Secrets, Barry Sheehy joins the assault on fake history. Lincoln was not the kindly Saint depicted in American textbooks but a ruthless dictator who incurred the wrath of the South and an equivocating compromiser who earned the hatred of the Radical Republicans some of whom wanted him assassinated. And, o yeah, John Wilkes Booth? A lone crackpot? No, part of a conspiracy based in Montreal where confederates felt right at home. As soon as I received this book, I read the first page and didn’t put it down until I finished. Fascinating! Full of surprises on every page.” – Ishmael Reed, author of The Complete Muhammad Ali

“An impressive, quality job, both in production and history. You’ve certainly done Savannah proud! Congratulations and I hope its success matches its high quality.”
– Noah Andre Trudeau, author of Southern Storm: Sherman’s March to the Sea and Lincoln’s Greatest Journey