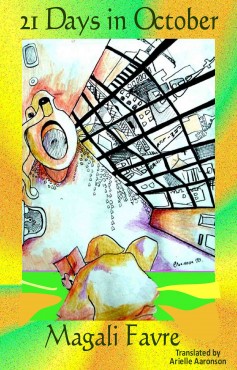 It’s before dawn in Montreal on October 16, 1970. Gaétan is finishing his shift at Dominion Textile just as the Canadian government proclaims the War Measures Act following two kidnappings—the only time in history outside of the two World Wars. Police and soldiers storm the streets and make sweeping arrests, imprisoning nearly 500 Quebec citizens without charge and holding them incommunicado for up to 21 days. Recounted in as many chapters, Gaétan’s experience during those dramatic days forces him to re-examine his own beliefs as his world is sucked into a maelstrom of political activity …

Quebec is poised for change. But is Gaétan ready?

His friend is arrested for taking part in a union meeting, his father, for speaking out too loudly about city elections during the crisis. By chance, Gaétan meets Louise, a young college student from a different background with radical friends. Louise takes a keen interest in him.

During this troubled time, young people will confront unrelenting factory work, unemployment, harsh police and military action, even imprisonment, but also hope, political commitment, and first love. They come to understand the sources of revolt.

Is this a true story? No.

Could this have happened in Canada? Yes.

Praise for 21 Days in October

“21 Days in October is an interesting historical story that covers many of the issues that French Canadians, or ‘Québécois’ people, had to face in the late 20th century. Through the lens of an ‘average’ teenager, studends will learn about how the Canadian federal government implemented the War Measures Act on its own people, which went hand-in-hand with the suspension of the Canadian Bill of Rights. The terrorist activities of the FLQ, including the murder of Pierre Laporte, as well as the language barriers for French Canadians, the tense employment situation between English and French Canadians, and the disparity of wealth across Quebec, ar also raised throughout the story. This would therefore be an excellent book for discussion in social science and history lessons that relate to Quebec. Favre’s writing moves at a quick pace, and expertly conveys many ideas and issues. … Gaétan is a well-rounded character who develops new ideas and has new experience, which Favre uses to illustrate the issues of a generation growing up in Quebec in the 1970s.” — Caroline Chung, Resource Links, Connecting Classrooms, Librairies & Canadian Learning Resources.

“21 Days in October is a compassionate telling of Gaétan’s Story and of a people’s story. The novel offers an important perspective for adults of any age, especially those who may not have lived in Quebec through the Quiet Revolution and during the October Crisis.” — Deanna Radford, Montreal Review of Books

“With this subtle and human revisiting of that that ultra-tense October 1970 and the cultural effervescence and political awakening of the time, Magali Favre provides teenagers with a wonderful lesson in history and hope.” Louis Cornellier, Le Devoir

Magali Favre grew up in Montreal and now lives in Paris. As a teacher and now a full-time writer, she conveys her passion and concern for history, education, and disappearing languages and cultures. She is the author of six novels and a young people’s guide to the French language.

Arielle Aaronson was born in the United States and holds university language and translation degrees from Tufts, Concordia and McGill. Now living in Montreal, she works as a language professional in cinema, education, and literary translation.

Available in all ebook formats

Release in the United States in February 2014