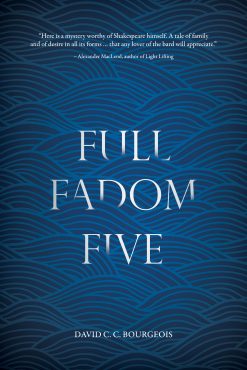 Questions surrounding his parents’ deaths have haunted Noah Lamarck for almost thirty years. Now he copes with a grandfather suffering from dementia and an overwhelmed grandmother, the two people who raised him in Cape Breton. Money is tight and problems multiply. After relocating to Toronto to help his estranged wife care for their son, Noah is laid off from the Fisher Rare Book Library.

Growing desperate, he seizes an unexpected lifeline. Noah and his friend, graduate student Cecelia Lines, agree to investigate new evidence of Shakespeare’s life for an eccentric bibliophile. But the more they delve into the playwright’s life, the more they are drawn into each other’s; and despite their growing feelings for one another, their divided loyalties leave them increasingly at odds and vulnerable to the manipulations of their employer.

So unfolds a drama of love, sex, family histories, obsessions, and manipulations. Noah and Cecelia must navigate to save themselves, and Noah’s family, from ruin. From the Cape Breton seacoast to the streets of Toronto to 16th-century London, the past is always present in Full Fadom Five.

Straddling the English Renaissance and the turn of the millennium, Full Fadom Five wrestles with the question every culture, and every human being, must eventually ask: what shall we carry forward, and what shall we leave behind?

David C.C. Bourgeois was born in Kitchener-Waterloo and grew up in Port Perry, Ontario. He now lives in Montreal, where he writes fiction and drama and teaches English Literature at John Abbott College. Full Fadom Five is his first novel.

“Here is a mystery worthy of Shakespeare himself. With scholarly precision, and expertly rendered experiments in diction and form, Full Fadom Five, charts a course that carries the reader from the shore to the city, and back across the centuries. A tale of family and of desire in all its forms, David Bourgeois has composed a beautiful story of love that any lover of the bard will appreciate.”  Alexander MacLeod, author of Light Lifting, finalist for the Giller Prize

“With its astonishing range and intrigue of plot, its diversity and uniqueness of characters (in all their delight and discomfort), and with the wit and wonder of its sentences, including tours de force of Elizabethan English and the prose of the King James Bible, Full Fadom Five creates the simultaneously lived and made quality we require of literature.”
Geoffrey Cook, author of Afterword

“Full Fadom Five is a smart and red-blooded exploration of literary and personal inheritances, a bibliophilic, idiomatic and bawdy novel that not only moves seamlessly between settings, but also acrobatically between poetic and prosaic, intimate and oratorial, dramatic and colloquial language. Weaving his intrigue around a Renaissance legal document of indenture, Bourgeois knows, as Shakespeare did, how powerfully a language of debt and accountability can express human bonds and what we owe to one another.” Medrie Purdham, author of Little Housewolf

“Part family saga, part historical fiction, part mystery, written in versatile and accessible prose, enlivened by wit and humour, Full Fadom Five is a fascinating story of past lives and their influence on the present. Readers will be delighted by the satire in some scenes, and moved by the human and humane drama of others. A sheer delight to read.” Kenneth Radu, award-winning author of Distant Relations, and A Private Performance