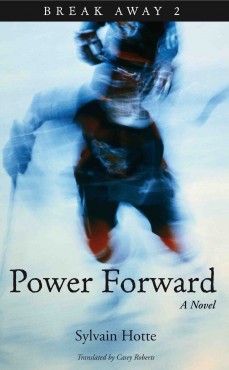 Now Available.  A thrilling, human story that takes you well beyond the world of hockey.

Alex McKenzie is back, a promising young hockey player who hopes to make the juniors in Quebec City. Though he still prefers fishing and roaming bush roads on his quad, he trains hard under his demanding coach Larry in his hometown on the Lower North Shore of the St. Lawrence.

His buddy Tommy is vying to make the juniors too. Once in Quebec City, things change. Tommy gets sullen and obnoxious as he hangs out with some dubious types. He and Alex grow apart and then tragedy strikes. In this sequel to Break Away, Jessie on my Mind, young people deal with powerful peer pressure, budding love, and catastrophe.

In this sequel to the award-winning Jessie on my Mind, young people deal with powerful peer pressures, budding love, and tragedy. Their friendships are sorely tested, their values are challenged, and they begin to learn what is important in life.

“The characters and situations are engaging. The on-ice passages are eloquent and vivid. We feel Alex’s conflict deeply: he loves hockey, but hates the pressure that comes with his success… more than just a sports story.” Patricia Jermey, Resources Link, April 2012

“Set against the backdrop of the highly charged world of competitive junior hockey, Power Forward captures the often random combinations of naïveté and smarts, impulsiveness and calculation, and compassion and cruelty experienced by  young people on the verge of adulthood. (…) it works well as a standalone…” Stephen Knight, Quill and Quire, June 2012.

“I love this second book in the series (…) it can be read alone. Sylvain Hotte’s descriptions of the St. Lawrence make you want to go there and he finely develops his characters in the Quebec City setting. (…) Highly recommended for boys…. but also for girls.” SOPHIE Lit.

Sylvain Hotte is an award-winning writer of fiction for young adults and children. Born in Montreal to an Innu mother and a Québécois father, he now lives in Quebec City. Power Forward is the second in the Break Away series after Jessie on My Mind.

Casey Roberts won the John Glassco Prize awarded by the Canadian Literary Translators Association for his translation Break Away 1, Jessie on My Mind. He lives in Montreal.