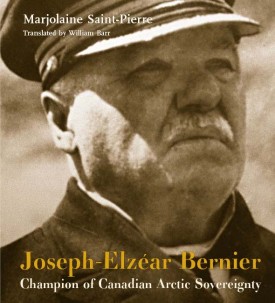 On July 1, 1909, Captain Joseph-Elzear Bernier, his officers and crew erected a plaque on Melville Island in the Northwest Passage and laid claim to the entire Arctic Archipelago for Canada. It was the crowning moment in the life of a man identified as one of the 100 Great Canadian Achievers in 1967. Born in the small busy seaport of L’Islet on the shores of the Lower St. Lawrence, Bernier was destined for a life on the sea to which he and his ancestors had been so intimately linked since the first Bernier touched land at Quebec in 1651. But it was through his own curiosity, drive, intelligence, and passion that he become a ship captain at 17 and later set many transatlantic records as ship helmsman. Above all, these traits enabled him to travel in the harsh arctic waters and ice and to learn how to winter there from the Inuit whom he encountered and befriended.

A passionate, magnificently illustrated, and rigorously detailed biography of a hero who marked the history and geography of Canada. Marjolaine Saint-Pierre spent five years researching Bernier and has spent even more defending his contribution to Canadian sovereignty in the Arctic.

“This is a meticulously researched book that is richly illustrated by black and white photographs. In addition, it also contains a number of maps that detail the sailing routes and winter harbors that Bernier and the ship Arctic occupied during a number of voyages starting in 1906 and only ending in 1925 when Bernier was 74 years old. It is indeed a remarkable story, and Captain Bernier’s place in Canadian and Arctic exploration should be reaffirmed and reemphasized by this publication. (…)
Bernier’s position in Canadian Arctic research needs to be elevated; sadly his contribution to exploration is not fully appreciated. The author should be congratulated for her meticulous research on the life of Captain Bernier, and the translator also deserves a round of applause for a translation that reads well and easily.”
– John Andrews, Institute of Arctic and Alpine Research (INSTAAR)

“… the definitive biography of Bernier. Ably translated by William Barr, overwhelming in detail, the book traces Bernier’s career from ancestry to legacy. This book belongs in the library of any Arctic aficionado.”
– Ken McGoogan, Canada’s History, formerly The Beaver

“this handsomely produced book has considerable value as a detailed record of Bernier’s life and times. (…) the numerous and well chosen illustration provide wonderful glimpses of the world in which he grew up and spent his youth, the nineteenth century world of wooden sailing ships and busy North Atlantic trade.”
– Janice Cavell, Polar Record, Cambridge University Press, 2010

“Arguably Canada’s greatest navigator, Joseph-Elzéar Bernier left his country a legacy of immeasurable worth — a solid territorial claim to the Arctic Archipelago. Leader of several expeditions to the region between 1904 and 1925, he planted Canada’s flag firmly on a region that global warming has made even more critical to the country’s future. In this generously illustrated book, historian Saint-Pierre chronicles the great man’s life and explorations, from his early years as a captain on transatlantic routes to his craving for recognition (deserved, in the opinion of many) during his sunset years. Essential for any collection on maritime history or exploration, this book will interest historians of Canada and the arctic regions, as well as many general readers.”
– (Annotation ©2010 Book News Inc. Portland, OR)

“A remarkable accomplishment by Marjolaine Saint-Pierre! The vast but meticulous research and the fine illustrations make it an essential book for any serious marine library.” — Cap-aux-Diamants

Translation and foreword by William Barr, Senior Research Associate at the Arctic Institute of North America, University of Calgary.

Published in collaboration with the Arctic Institute of North America.