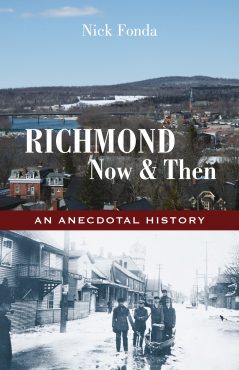 Richmond, Now and Then

If all politics is local, so all history is local… and anecdotal. As the great urban thinker Jane Jacobs said, anecdotes are the only real evidence because they come from stories people tell. Though not a bastion of wealth, Richmond is rich in stories. 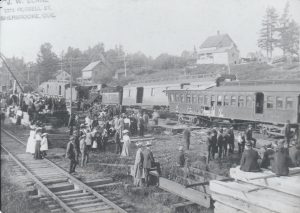 Some end sadly. Avery Denison carved a community out of wilderness, left many descendants, but was killed by highwaymen in 1826. Young Italian immigrant Ralph Andosca was mysteriously murdered in Melbourne in 1905.

Others are uplifting. Irish orphan Patrick Quinn, ordained priest in 1862, served the booming railroad town Richmond, for 50 years. Anita Mercier Demers surprised lumberjacks in 2013 when, with axe and brush saw, she earned the “Forester Emeritus” award for exemplary stewardship of her woodlot… at the age of 90 plus.

Readers will inescapably yearn to visit Richmond, now and then.

Nick Fonda’s previous books include Hanging Fred and a Few Others, Principals and Other Schoolyard Bullies, and Roads to Richmond.

Nick Fonda talks about Richmond, Now and Then with Susan Campbell of CBC’s Quebec AM.

About Nick Fonda’s Roads to Richmond the late Alistair MacLeod wrote, “Nick Fonda has captured the essence of one of the most unique areas within Canada.”