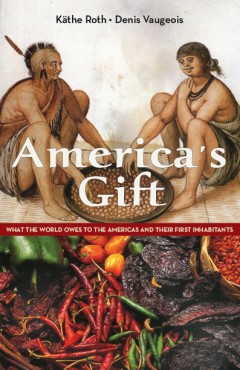 What the World Owes to the Americas and Their First Inhabitants

The world was never the same after 1492. The encounter of two “old worlds” gave rise to a truly new world on both sides of the Atlantic. America’s Gift recalls the full significance of the contact made between Europe and the Americas, mistakenly called the “New World.” As Columbian intellectual German Arciniegas wrote: “From questions of astronomy to the food on our table, America began transforming Europe the moment European explorers set foot on American soil. And what a transformation it was!” Authors Käthe Roth and Denis Vaugeois ably use an alphabetical glossary to connect the particular to the universal as they reveal some of the vast contributions the Americas and their original inhabitants made to the world. America’s Gift takes readers from one epiphany to another. In other words, Europe became a new world in the true sense of the term.

“The book is filled with little gems throughout… a great reference for research. A nice addition to any library or school.”
– The Eastern Door, Kahnawake Mohawk Nation

“This historical depiction of how Aboriginal Culture and ways of existing impacted mainstream society is incredible. The recognition of how sophisticated in methodologies Aboriginal peoples were before contact is exceptional. This book seeks to give empowerment to our people in a way that has needed to be said.”
– Alissa Marshall, THE NATIVE CANADIAN, Montrhly Newspaper of the Native Canadian Centre of Toronto

“America’s Gift contains the kind of information that should be required reading for all schoolchildren.”
– Louise Fabiani, Rover Arts

“Authors Käthe Roth and Denis Vaugeois have put together a fascinating compendium of English words that owe their etymological origins to native languages of the Americas. But America’s Gift does more than this; working within the structure of an illustrated dictionary, Roth and Vaugeois also manage to demonstrate how the civilizations of pre-contact America affected the way the world lives, eats, and thinks today. In addition to specific words, broader thematic entries are incorporated, on topics such as nutrition, team sports, electrification, and slavery. (…) Roth and Vaugeois do an admirable job of painting big pictures within small entries. America’s Gift is a thought-provoking read that will be a valuable resource for students and scholars alike.”
– Raquela Rivera, Montreal Review of Books

“What do vanilla, the word O.K., and cornflakes all have in common? They all originated in the New World. In this illustrated glossary, the authors present entries for hundreds of plants, animals, foods, words, and other things that the Americas have given to the rest of the world. They also include short sidebars on topics such as slavery, ideas, epidemics, nutrition, and property. Interesting and often surprising, this book will appeal to any reader who loves words, word origins, or history.”
(Annotation ©2010 Book News Inc. Portland, OR)

“A work of remarkable quality that radically shakes up our outlook on the Americas.”
Clin d’oeil

Käthe Roth, a translator, and Denis Vaugeois, a historian and publisher, have been working together on history books for the last fifteen years.

Speak to Me in Indian