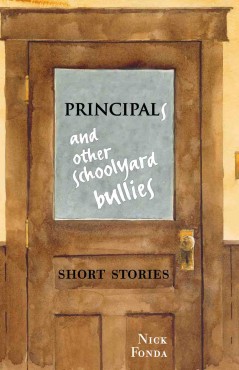 Who has never encountered a bully? Who has never told—or been told—a story of a bully? With an uncanny insight into what bullies are all about, Nick Fonda brings sensitivity and even humour to an otherwise sinister topic.
Everybody knows that bullying is not limited to physical violence or intimidation and that bullies don’t necessarily look or dress like thugs. Through the voices of boys and girls, men and women, Nick Fonda recounts events and puts words to feelings and emotions that mark people’s lives. His characters include the biased principal who wreaks havoc as he protects his own pets, wicked adoptive parents, and the neighborhood tough who, with his parents’ approval, terrorizes anybody smaller than him.

These eleven intriguing stories, ably illustrated by Denis Palmer, will charm, surprise, and stir readers. A thought-provoking delight for educators, parents, and students, in fact, anybody who has been confronted by abuse of power, be it subtle or flagrant.

“With unadorned language and quiet resolution, Fonda (Roads to Richmond: Portraits of Quebec’s Eastern Townships) tackles childhood problems in frequently rural, wintry Canadian settings. Narrated by outcast youths or adults whose current circumstances trigger memories, these stories explore how victims learn to assert themselves or let bygones pass in the face of bullies with unclear motives. Cruelty appears as its own raison d’être; it reaches an extreme in “Sugden,” a story of suspected, attempted murder during class play rehearsals, and “The Thumb,” which concludes with evidence of dismemberment. Other stories focus on less egregious, but still emotionally-raw incidents: a home-schooled student adjusts to a mainstream classroom; a mistreated nephew rebels; a hospital worker considers delaying a former bully’s treatment. Despite the unfairness his characters face, they largely persevere, suggesting that memories of what others have said or done with ill intentions do not have to become lifelong burdens…” Publishers Weekly, Dec. 1, 2011.

“Some stories deal with the ‘different’ child place within a rigid, unyielding system. Nick Fonda has a great sense of compassion. Sometimes he inhabits the persona of the ‘trapped’ child, sometimes the equally ‘trapped’ adult… These stories are memorable for what they say and for what they suggest. We are made better, as individuals, for listening to Nick Fonda’s voices. This is a fine collection.”  Alistair MacLeod, winner of the 1999 International IMPAC Dublin Literary Award

“This quick, engaging read highlights the “sudden visceral reaction” that warns students as they meet a bully. Clearly written, these stories will help teachers, parents, and students to recognize the bullying experience but can be appreciated by all and should attract a general audience. Recommended.”– Library Journal, August 15, 2011

“Readers will be lulled by [Fonda’s] perfectly crafted, streamlined prose, while images of cruelty and betrayal sneak up in surprise…  His poet’s ear brings a delicate lightness to his work that contrasts wonderfully with the dark subject matter… It’s not the setting or even the events in these stories that make readers shudder, it’s the familiarity of the characters under attack… Fonda manages to get to the heart of a social problem in an entertaining, thought-provoking book that is both a pleasure to read and a call to awareness.” – Foreword Reviews, September 2011

“Principals & Other Schoolyard Bullies tells the truth about school through these eclectic stories about the complicated lives of both students and educators, and a system that often purports to be about doing good, and ends up being something else entirely.  Fonda’s characters are well-drawn, coming to life on the page with intelligence and imagination.” —Zoe Whittall, prize-winning poet and novelist, Toronto

“Each story is beautifully told … the barbs are well directed. Each character victimized by the system seems to have emerged unscathed, the best retribution of all… I am impressed—no in awe… a masterpiece!”—Sharon McCully, The Record

Nick Fonda is an award-winning reporter who has also wielded chalk in classrooms in Canada and the UK for more than 25 years. He has kept in touch with reality—other than the overwhelming reality of schools—by plying such trades as lumberjack, carpenter, restaurateur and raconteur. Nick Fonda’s non Roads to Richmond: Portraits of Quebec’s Eastern Townships (Baraka Books 2010) was remarkably successfu.

Denis Palmer Denis Palmer holds a degree in architecture from McGill University. He teaches art and has exhibited his work widely. He published a book of his work entitled “Homage to Rural Life.”