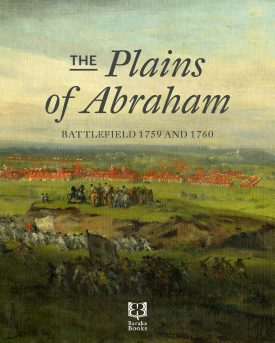 British troops was Major General James Wolfe, while the Marquis de Montcalm was at the head of the French forces. The British were victorious and five days later Quebec, the Capital of New France, surrendered.

That storied battle still resonates. The surprise landing of British troops combined with the short duration of the battle and the death of the French and British commanders have remained etched in our memories. Though the the Battle of the Plains of Abraham has been considered  a turning point, it overshadows other significant events in the North American campaign that spanned the years from 1754 to 1760.

This book puts the Battle of the Plains of Abraham in the broader context of a war with worldwide consequences, the Seven Years’ War. It examines the actions that sparked the fighting between France and Britain in North America, before the Seven Years’ War began. These include conflict in 1753 in Ohio between English/American troops led by George Washington and Canadien and French troops, and the Jumonville Afffair in 1754.

It dissects the events leading up the 1759 battle, such as punitive British expeditions against the civilian population and the siege of Quebec, and casts new light on the less-known battle of 1760. Those years, which marked the end of France’s presence in North America, have left a deep emotional legacy.

Taking into account the most recent historical research, Hélène Quimper offers both lay readers and historians a clear and rigorous account of those world-shaking events. The author has also selected close to 100 illustrations, maps and tables, including some that have not been seen by the general public.

The National Battlefields Commission in collaboration with Hélène Quimper

Katherine Hastings has worked as a Quebec-based translator and copyeditor since 1995. She has translated two novels by Jean-Michel Fortier, The Unknown Huntsman and The Electric Baths, co-translated Tatouine, a novel by Jean-Christophe Réhel, and translated Montreal and the Bomb by Gilles Sabourin.