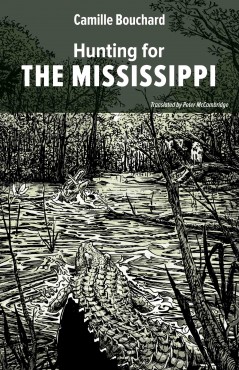 Hunting for the Mississippi

The year is 1684. Twelve-year-old Eustache Bréman leaves behind a life of misery begging on the streets of France for a second chance in the New World with with his mom, his sweetheart Marie-Élisabeth, and Marie-Élisabeth’s family. But life is tough, with plenty more tragedy and disappointment to come on Cavelier De La Salle’s ill-fated expedition to the Mississippi.

Squabbling leaders, bloodthirsty freebooters, a hostile Karankawa nation and the wild Gulf Coast bayous make for heartbreaking adventure—and occasional proof that “all sorrows end up diluted in the concerns of everyday life.”

Join Eustache as he comes of age in Louisiana.  This YA novel in sparkling English translation is every bit as modern and playful as Camille Bouchard’s original French, which pleased people of all ages.

“The voyage scenes introduce readers to (real-life) characters who were at odds with La Salle and his associates. Several resented his privileged social status. Eustache and his family and friends are loyal to their leader, and Eustache is thrilled to become one of his messenger boys. The men who later kill La Salle and his nephew are depicted as surly thugs. … Camille Bouchard is a master of the cliff-hanger chapter ending.(…) a sophisticated, compelling novel. Recommended.” Ruth Latta, CM Magazine – Canadian Review of Materials, University of Manitoba. Read Review

“Bouchard has combed the research and offers a fresh take on what happened to De La Salle’s expedition. In Hunting for the Mississippi, the author weaves an exciting tale based largely on true events. He brings 17th-century America alive with vivid detail and colourful characters in this fast-paced adventure story that will entertain readers of all ages.” John Spychka, Life in Québec 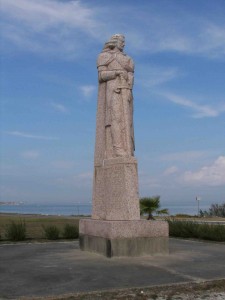 Monument to Cavelier de La Salle, Indianola Texas where Eustache Brémen and the others settled during La Salles ill-fated expedition.

Camille Bouchard transports readers, young and old, across continents and epochs. He never stops writing and travelling. Governor General’s award winner and a five-time finalist, he is the author of more than 80 novels for readers of all ages. Some works appear on international selection lists, including the White Ravens International List of Honor. Hunting for the Mississippi is Bouchard’s first book to appear in English.

“A literary phenomenon.” Le Devoir.
“A leader in historical fiction.” La Presse.
“Exciting and daring.” “A remarkably gifted story-teller”, CBC/Radio-Canada.
“Hunting for the Mississippi captivates readers from beginning to end … Readers 14 and up will discover both history and human frailty.” Le Devoir, Montreal

Peter McCambridge is an award-winning literary translator. He founded and heads the Québec Reads webzine and now runs QC Fiction, a publishing imprint of contemporary Québec literature in translation. Peter McCambridge has also translated the first three volumes of the popular YA historical fiction series The Adventures of Radisson, 1, 2 & 3.