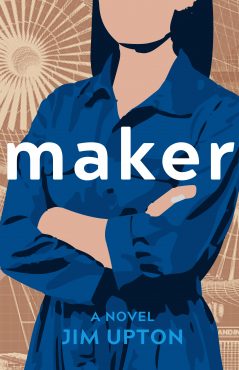 Nicole Fortin is on the cusp of realizing a long-held dream when her life takes a sudden turn. Instead of participating in the Olympic Games, she finds herself struggling to master the challenging physical demands of her job in an aerospace plant and win the confidence of her male colleagues.

As her involvement in union activity deepens, she is drawn into the centre of a bitter labour battle that pits her workmates against their employer.

In the midst of this escalating confrontation, incidents from Nicole’s past threaten to destroy her credibility with her coworkers and her relationship with her daughter. Workplace and family ties become tangled and stretched to the breaking point.

Maker is working-class literature in the tradition of Theodore Dreiser, John Dos Passos and from Baraka Books Mick Lowe and The Nickel Range Trilogy.

Jim Upton worked for twenty-five years in unionized jobs at an aerospace plant. During this time, he participated in several sets of contract negotiations as a union activist, including one as a member of the union negotiating committee. He lives in Montreal. Maker is his first novel.

“There’s a lot of trailblazing happening here, and a keen labour story told. … Upton’s style is simple and matter-of-fact, with short chapters lending themselves well to the pace of action and creating a sense of urgency and tension, particularly as the negotiations heat up in the story.” Alison Manley, The Miramichi Reader

“Jim Upton’s page turning novel Maker is a fast paced look inside the anatomy of a bitter strike in Montreal’s aerospace industry. The author brilliantly captures the tensions and fears that run through the minds of every striking worker and the enormous pressure loaded onto the shoulders of every bargaining committee member. An excellent read!” Sid Ryan, Former President of the Ontario Federation of Labour

“There are precious few Canadian novels about workers and work, and fewer still about industrial work in particular. Fictional accounts of strikes, viewed from the inside, are yet harder to find. In Maker, Jim Upton has crafted a fast-paced portrait of a woman who rises to lead her union through a hard-fought battle against a multinational determined to increase its profits on the backs of Quebec workers.” Elise Moser, author of What Milly Did: the Remarkable Pioneer of Plastics Recycling

“Maker is the inside story of life in the skilled trades from the point of view of a real person. It’s not the story of the company as told in the business section. It’s about the struggle for fairness by flesh and blood unionized people who work on the shop floor.” Anne Lagacé Dowson

WATCH JIM UPTON AS HE TALKS ABOUT  MAKER WITH ELISE MOSER AND OTHER GUESTS.