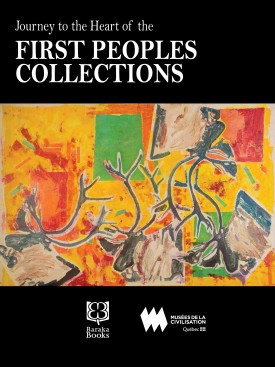 “Indeed, the book is a treasure trove of information, with 15 essays about the collection and hundreds of illustrations, all with explanations of what the object depicted was used for. It also contains footnotes to more references, and a long bibliography.” John Pohl, The Montreal Gazette

Journey to the Heart of the First Peoples Collections reveals objects of unimagined beauty and rarity. Its pages will bring you into the world of the Aboriginal nations of Quebec, Canada, the United States, Amazonia, and Oceania. The history of this collection spans a period stretching from New France, with objects brought back by the priests of the Séminaire de Québec from missions in various regions of the Americas, to the present, with the most recent donations by collectors passionate about history and the ways of life of the First Peoples. Let yourself be enthralled by one of the oldest and richest collections in the Musées de la civilisation.

Marie-Paule Robitaille studied History, Ethnology and Museum Management. From 1970 to 1973, she worked on youth education programmes in fly-in Cree communities in northern Manitoba. After directing Riel House National Historic Site in Winnipeg, she worked for several years as a curator for Parks Canada’s (Prairie and Northern Region -Yukon to Ontario) Métis collections. She will also work as curator in Parks Canada’s Québec Region. From 1988 to 2016 she was curator of Indigenous collections at the Musées de la Civilisation in Québec City. She has worked on many collaborative and international exhibitions with the 11 First Peoples of Québec. In 1993, she launched the IPAM project “Facilitating Cross-boarder Exchanges between Museums in Canada and in the United States” jointly with the Arizona State Museum and later participated several years in the Université Laval’s vernacular architecture programme with the Innu communities of Quebec’s North Coast. She has presented the peculiarities of conservation, documentation and dissemination of First Peoples and Métis collections in numerous national and international symposia in Canada, France, Italy and the United States. Since her retirement, she collaborates regularly with Indigenous cultural institutions and more specifically on questions of ethics and documentation of heritage objects with the First Peoples in Quebec and the Métis Nation in Manitoba. She presently is a member of the Council for Reconciliation of the Association of Canadian Museums..

Not an act of God, 1998, Glenna Matoush, Acrylic and mixed media on canvas

Glenna Matoush is a deeply committed artist who has earned a solid reputation. Born to a family of Anishinabe (Ojibway) artists in Ontario, she lived for many years with the Eeyou (Crees) of Mistassini. After her artistic training in fine arts, she devoted her time to painting, sculpture, murals, and stained glass, but also began her career in drawing and prints. Her very sensitive work bears witness to her social and political commitment.

“Journey to the Heart of the First Peoples Collections will be of interest to art historians in the field, and the many people who have a personal interest in tribal arts. The volume… includes high quality prints of a variety of objects, some of them rarely seen and perhaps never before published. In many cases the photograph is captioned with information regarding its construction, but also on the events around the collection of the item itself. Such details further enrich our understanding of the role the article played, and may continue to play, in the lives of the people who made it.” Margaret MacKichan, Director, Great Plains Art Institute, Sinte Gleska University, Tribal College, Journal of American Indian Higher Education

Other books on First Nations Culture and History, Please See

Speak to Me in Indian by David Gidmark

America’s Gift, What the World Owes to the Americas and Their First Inhabitants, by Käthe Roth and Denis Vaugeois