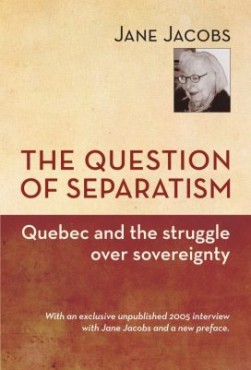 The Question of Separatism

Quebec and the Struggle over Sovereignty

Baraka Books proudly offers readers a new edition of her third, least-known book to mark that anniversary. Undeniably a genius on urban issues, Jane Jacobs also grappled with the question of nations and political sovereignty. Out of print since the mid 80s, The Question of Separatism, Quebec and the struggle over sovereignty now includes a new preface and an exclusive and previously unpublished 2005 interview conducted in Jane Jacobs’ Toronto home just a year before she died. Random House first published the book in 1980.

Using her renowned ability to observe the real world, Jane Jacobs discusses the timeless issues that affect—or afflict—debate on separatism in the world. These include emotion, national size and the paradox of sizes, duality and federation. She also delves into the specifics of Quebec-Canada relations and casts her experienced and penetrating gaze on two great cities, Montreal and Toronto.

Jacobs’ study of how Norway became independent from Sweden peacefully and how both countries prospered remains acutely relevant. She suggests Canada can learn from their example and find win-win solutions.

In the 2005 interview she shows how history has proven her right, discusses reaction to the book, and addresses burning issues like tar sands development in Alberta, the future of the Euro, and causes of financial and economic crises. The Question of Separatism is essential reading for anybody who has been influenced by her other great books. 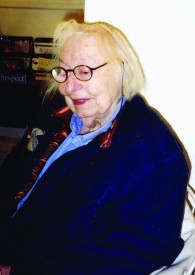 Jane Jacobs (1916-2006) was born in Scranton, Pennsylvania, and lived in New York and Toronto. She wrote six other books that have sold in millions, including the groundbreaking The Death and Life of Great American Cities (1961).

About Jane Jacobs and her work

“The most influential urban thinker of all time.” 2009 Plantizen Survey.

“One of the true originals living among us.” Robert Fulford, Toronto.

“There’s no writer more lucid than Jane Jacobs, nobody better at using wide-open eyes and clean courtly prose to decipher the changing world around us.” San Francisco Chronicle.

“the matchless analyst of all things urban [whose seemingly] wildly eccentric ideas on cities have been vindicated so many times, and in so many ways.” The New Yorker.

An Independent Quebec, The Past, The Present and The Future by Jacques Parizeau