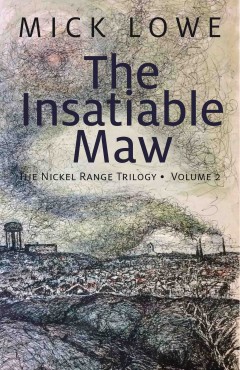 Jake McCool, the injured hard-rock miner introduced in The Raids (Vol. 1), returns to work for INCO, but now at its nearby Copper Cliff smelter complex. In no time, he finds himself embroiled in a vicious fight over health and safety. Particularly alarming are the extreme levels of sulphur dioxide that poison the air in the smelter but also in the entire surrounding area, thus creating Sudbury’s infamous “lunar landscape.”

The fight takes on new dimensions when free-lance reporter Foley Gilpin, who had worked for the Mine Mill union in The Raids, sparks attention at The Globe & Mail. At the same time local parliamentarian Harry Wardell smells high-level collusion between Inco and the government at Queen’s Park in Toronto.

Through the lives of Jake and his girlfriend Jo Ann Winters, their roommate Foley Gilpin, and a new cast of characters, Mick Lowe chronicles an entire community’s eco-defiance.

Praise for Volume 1, The Raids

“…a compelling story of political power, love and hatred all rolled into a gritty, hard-hitting novel of the Nickel Range.” Dave Patterson, former President of Local 6500, USWA

“… a fascinating excursion into unexplored realms in the Canadian past.” Larry Hannant, University of Victoria, History Professor.

Mick Lowe is a prolific journalist, writer, and newspaper columnist, and author of the true crime classic Conspiracy of Brothers and The Raids. He lives in Sudbury, Ontario.

Cover and illustrations by Oryst Sawchuk.