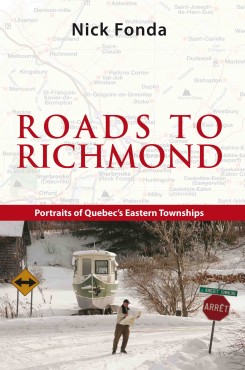 “Nick Fonda has captured the essence of one of the most unique areas within Canada.” Alistair MacLeod

“A gem of a book… to be savoured. ” — Jim Napier, The Sherbrooke Record

“Richmond is easy to find on a map,” writes Nick Fonda. “Or at least the name is easy to find. There are at least fifty Richmonds worldwide and no fewer than four in Canada, of which two are in Quebec… The most frequent response when I mention Richmond is, ‘Oh, I know Richmond.’” Those people stand to be corrected.

In fact, Nick Fonda’s Richmond, tucked away in the Saint-François River valley near the northern edge of Quebec’s Eastern Townships, gains in appeal and fascination for that very reason—we erroneously think we know it.

This unusual, sometimes quirky, road book works like a mosaic. Its stones are the brief histories, candid snapshots, curious anecdotes, insights, reflections, and stories to make you smile.

The big picture is a moving portrait of a little known but historically important corner of Canada—Quebec’s Eastern Townships. Nick Fonda masterfully puts you behind the wheel—sometimes in the train’s engine—and lets you meander through the Townships to meet the people who make the place unique and where the famous two solitudes have grown entwined.

With nine original and thoughtful illustrations, Denis Palmer captures Nick Fonda’s take on a part of the world that deserves to be better known.

“Nick Fonda has captured the essence of one of the most unique areas within Canada. This book is full of specific insights into a specific place. It possesses both truth and charm, which is a rare combination in today’s world. It will both enlighten and entertain. Buy it. Read it. Think and ponder universal truths.”—Alistair MacLeod

“Roads to Richmond, is a collection of fascinating and insightful vignettes of life in the Eastern Townships. Illustrated with charming monochrome watercolour sketches by Townships artist Denis Palmer, it is a fine book (…) A volume to be savoured. Nick is a fine writer and his many tales flow effortlessly, pulling the reader along from one to the next, making it all too easy to finish the book at a single sitting… A very auspicious debut of a very talented writer. Well done, Nick!” — Jim Napier, The Sherbrooke Record, October 8, 2010

Novelist Kathleen Winter descrives it as “A Hometowen Guide to the Eastern Townships.”

Nick Fonda has worked as a lumberjack, farmer, carpenter, restaurateur, and raconteur. He has also squeezed in a career as a teacher, both in the UK and Canada, and as a journalist and writer. He lives in Richmond, Quebec.

Denis Palmer is a native of Sawyerville and holds a degree in architecture from McGill University. He has taught art for many years, drawing, painting, and exhibiting works throughout the Eastern Townships.