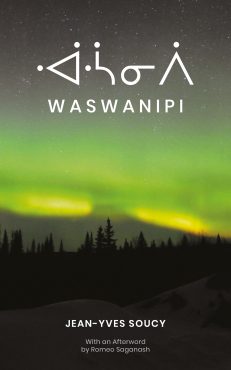 “Jean-Yves Soucy’s story and encounter with my Dad provides a charming glimpse into a changing world, for us all.” Romeo Saganash

It’s 1963, Jean-Yves Soucy is 18 and dreams of being a fire warden scanning the boreal forest from a fire tower. But he ends up at an equipment depot between Val-d’Or and Chibougamau. To his delight, he is located near the Cree community of Wawanipi. With two Cree guides, including a man named William Saganash, he will be canoeing through the lakes and rivers of the region.

On each encounter with the Crees, Jean-Yves expects to see a new world. Instead, he meets a different civilization, as different from his own as Chinese civilization. Yet he knows nothing about it.

He wrote Waswanipi because Romeo Saganash, son of William, insisted: “You have to write that, Jean-Yves. About your relationship with my father and the others, how you saw the village. You got to see the end of an era.”

Jean-Yves Soucy (1945-2017) was an award-winning writer, publisher, journalist and scriptwriter, based in Montreal. His previous work in English includes Family Secrets, The Controversial & Schocking Story of the Dionne Quintuplettes and A Summer Without Dawn.

Romeo Saganash, born in 1961 on the shores of a lake in his parents’ tent near Waswanipi, is a former Deputy Grand Chief of the Grand Council of the Cree. He was MP for Abitibi-Baie James-Nunavik-Eeyou from 2011-2019.

“A book that feels like a movie.” Mathieu Lavigne, Radio Ville-Marie

“an appeal to generosity and openness… This beautifully written—and witty—story becomes particularly significant through the encounter of two cultures, the overcoming of ignorance or distrust that separates them…” Nuit Blanche

“like a summer gift, to be savoured, slowly.” Yvon Paré Litterature du Québec