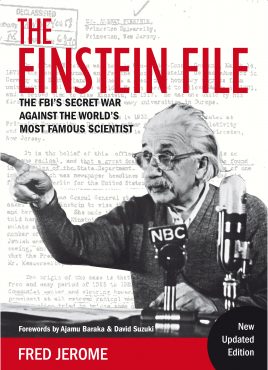 Einstein arrived in the United States in 1933, the year the Nazis rose to power in Germany. From that moment until he died in 1955, J. Edgar Hoover’s FBI—with other agencies—feverishly collected “derogatory information” to undermine the renowned scientist’s influence and destroy his reputation.

With material accessed under the Freedom of Information Act, Fred Jerome reveals the depth of, and the reasons for, this massive anti-Einstein campaign. He also uncovers Einstein’s strong political commitments that have been conveniently buried under the image of the absent-minded icon genius. Whereas Einstein said on several occasions, “My life is divided between equations and politics,” Jerome delves into his little-known political half-life. 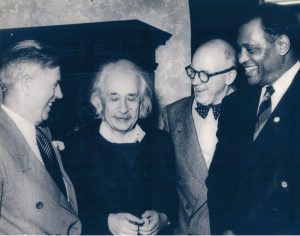 This new updated edition presents new information about Einstein’s political involvement and commitment, so detested by the FBI. This includes his very close relationship with Paul Robeson and their collaboration in fighting racism; his brilliant insights on Israel and Zionism; his opposition to nuclear weapons; and his life as an organizer. Fred Jerome concludes that if Einstein were around today, he “would put his knee to the ground with Colin Kaepernick, he would be front and center in opposing the warmongers and the neo-McCarthyites, be they Democrats or Republicans, he would speak out against those who give themselves the right to recolonize Asia and Africa, he would probably be part of the BDS movement, and would surely call out the Confederate-flag-waving marchers in Charlottesville (and elsewhere).”

Ajamu Baraka has been involved in grassroots organizing, international solidarity, and educating for over four decades. He was the Green Party’s nominee for Vice President of the United States in the 2016 election.

David Suzuki is a geneticist, broadcaster, and environmental activist. A Canadian of Japanese origin, he and his family were interned during World War II. His work as a broadcaster, particularly with CBC’s The Nature of Things made him a unique figure in science and television.

“This carefully researched and reported account of Einstein’s surveillance by the FBI adds, new, what Einstein might call ‘dimension,’ not only to his personal history but maybe even to our own present-day character as a nation, conceived as it was in the moral vacuum of the McCarthy era, shaped by the Cold War and too many ill-conceived adventures overseas, come to maturity in this current precarious hour. Sometimes what worries the FBI can also serve as a clue to what, somewhere back in our national soul, lingering and toxic, has been eating away at us. In redeeming from the forces favoring general amnesia this essential set of connections, Fred Jerome has given us back a piece of our history, and hopefully of our conscience as well.”— Thomas Pynchon

“A highly readable book—investigative journalism that qualifies as academic history. It is also scary.” —Harper’s

“Jerome has unearthed a side of Einstein that has been lost in most biographies.” —Independent Weekly

“As this well-done study makes clear, [Einstein] was also a social and political activist with strong pacifist and Socialist leanings. Einstein publicly supported the civil rights and anti-lynching movements and was a friend of leading African Americans. (…) Perhaps the most useful aspect of this excellent book is that it reminds readers of the less-celebrated aspect of Einstein’s character: he was ready and willing to participate in the political arena.” —Library Journal