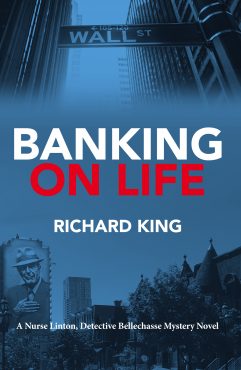 Michaela (Mickie) Bédard works at the Stevens, Bédard Investment Bank, a bank founded by her great grandfather. She is working on an Initial Public Offering for a technology company. Walking home one evening she suffers a severe asthma attack and heads to Montreal’s Gursky Memorial Hospital. Triaged by Annie Linton, she is kept in the hospital overnight. During her stay, an unknown assailant attacks Mickie in her room.

When a murder victim is discovered at the Gursky, Detective Sergeant Gilles Bellechasse is called upon to investigate.

The investigation leads Gilles to New York and to a network of shady characters operating in New York and in Montreal who are trying to steal the deal from Mickie. The investigation is further complicated by three more murders. King brilliantly combines the best elements of a cozy with a gritty police procedural in a novel full of twists and unexpected turns. Annie’s clever insights are critical in solving the crimes.

Richard King is author of six mystery novels and two biographies. A books columnist on CBC radio, King volunteered in the Emergency Department of the Jewish General Hospital for ten years.

“King masterfully uses a slick third-person narrative throughout his novel, shifting from character to character at exactly the right moment, giving readers the best seat in the house. (…) Banking on Life definitely belongs in the long line of Montreal detective novels, with its polished writing and rapid-paced action, all taking place in the well-known nooks and crannies of today’s city.” Sharon Morrisey, Montreal Review of Books

About A Stab at Life, the first novel in this series:

“King, a lively writer with fine storytelling skills… Readers who know Montreal will recognize neighbourhoods, streets and landmarks in A Stab at Life. Indeed, the city is as much a character as the nurse and the detective.” Susan Schwartz, The Montreal Gazette.

[King] excels in weaving in working-class immigrant life in Côtes-des-Neiges into his intricate plot of crime and passion.” The Ottawa Review of Books

“A Stab at Life is a top-notch Montreal crime tale. When it comes to masterful storytelling, Richard is King.” Andreas Kessaris, bookseller and author of The Butcher of Park Ex & Other Semi-Truthful Tales