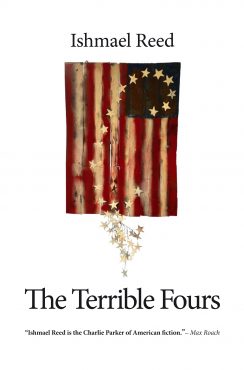 When Ishmael Reed wrote The Terrible Twos about the American infantile need for instant gratification, he could not have realized that in June 2020, journalist Nicole Wallace would be referring to a president as a “toddler.” Reed had parodied other genres, the gothic novel, the detective novel, the western and the neo-slave narrative, a term that he coined in 1984, and which began a big academic payroll as it was included in syllabi nation-wide. From his first novel, The Free-Lance Pallbearers, Afro-Futurist before the critical term existed, Ishmael Reed has reshaped traditional forms and extended them. As a Jazz pianist, who has performed in clubs and even in a palace in Italy, he compares it to taking cliché chords and re-harmonizing them.

The Terrible Fours follows The Terrible Twos (1982) and The Terrible Threes (1989). It is part science fiction, part Washington Novel (Think Drew Pearson’s novel, The Senator, films “Seven Days In May” and “The Manchurian Candidate”) and part Christmas Novel. Some characters have been dropped and some of the principals are back. St. Nicholas is here, but his sidekick Black Peter is missing. Dean Clift, the president who was removed from office, still resides in a Maryland sanatorium. Televangelist Clement Jones still runs the White House. “The Rapture,” that Jones and the figurehead president Jesse Hatch promised, hasn’t arrived.

The citizens of the planet Dido await an invasion from earth and their planet, an alien in the body of a deceased television producer, works inside the government and attempts to disrupt the invasion. Termite Control, a follower of Odin, and a necrophiliac, who was dismissed as a political threat in The Terrible Threes, is gaining in the polls, and more and more and more. Reviewing The Terrible Twos, the late John Leonard wrote in The New York Times: “Mr. Reed is as close as we are likely to get to a Garcia Marquez, elaborating his own mythology even as he trashes ours.”

Ishmael Reed is a poet, novelist, essayist, playwright and songwriter. He has won prizes and grants in each category. He is also an illustrator and Jazz pianist. His most recent awards include the Alberto Dubito Award for International Poetry, presented at the Ca’Foscari University in Venice in 2016 and The AUDELCO award for theater presented in 2017. In 2019, he began his 36th year as a professor at The University of California at Berkeley. He also teaches at the California College of the Arts where he is a distinguished professor. His most recent books published by Baraka Books are Why No Confederate Statues in Mexico (2019) and The Complete Muhammad Ali (Baraka, 2015).

Illustrations by the author.

“Like his literary ancestors, Reed disturbs the peace with his uncanny analyses of what many of us deem inconvenient: the tension between the actual and the real.  One character describes America as “home. A country where truth and fiction were always trading places.” The Terrible Fours explores the hidden dimensions of America’s sordid political histories.” Jerry W. Ward, Jr. The New World Review, Vol 14. No. 92

“The Terrible Fours, is a clever, bitingly sharp and unconventional reality show of the nation Donald Trump both made and undid.  It’s not pretty, but it is as funny as Richard Pryor, as sacrilegious as Lenny Bruce and as clever as Mark Twain..” Ron Jacobs, Counterpunch