In Books Tagged In Barack Obama, Going Too Far, Ishmael Reed, Racism, and US Elections.

Ishmael Reed goes too far, again! Just as the fugitive slaves went to Canada and challenged the prevailing view that slaves were well off under their masters, Ishmael Reed has gone all the way to Quebec—where this book is published—to challenge the widespread opinion that racism is no longer a factor in American life.
In some ways, says Reed, the United States very much resembles the country of the 1850s. The representations of blacks in popular culture are throwbacks to the days of minstrelsy. Politicians are raising stereotypes about blacks reminiscent of those that the fugitive slaves found it necessary to combat: that they are lazy and dependent and need people to manage them.

About Going Too Far and Ishmael Reed

“Ishmael Reed is a buzz-saw. He ambushes arguments from everunpredictable angles forcing the rest of us, whatever our politics, to acknowledge not just his passion but the fierceness of his intellect.” Trey Ellis, author of Platitudes, Home Repairs, and “The New Black Aesthetic.”

“Reed is a pre-future sage… His fiction, poems, plays, and recordings are a moral looking glass for envisioning what we might be. His nonfiction, however, is at once testimony and indictment of what we are.” Jerry Ward, Professor of English and African American World Studies, Dillard University, New Orleans. Ishmael Reed and Verbal War
“Reed tackles the Tea Party’s shockingly racist antics, Obama’s accomplishments, feminism’s effect on the black male image, the Occupy Movement—to varying results. Reed is best when he historicizes, as in his essay “Ethnic Studies in the Age of the Tea Party,” and when he draws on the more rational, even-tempered voices of others, as in his interviews with Terry McMillan and Nuruddin Farah.” Publishers Weekly, November 05, 2012. 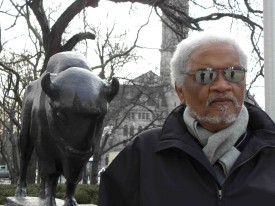 “A courageous American man of letters, one who, if he lived in most places in the world, would be a martyr by now.”—Hakim Hasan, The San Francisco Chronicle

“Reed’s writing is incisive and astute; impassioned and amusing. He fully researches his topics and makes a decisive stand based on the facts, as he sees it….”—Gabrielle David, Phati’tude Literary Magazine

“With Ishmael Reed, the most persistent myths and prejudice crumble under powerful unrelenting jabs and razor-sharp insight.”—Le Devoir, Montreal

Ishmael Reed is an essayist, novelist, poet and playwright, and a prizewinner in all categories. He taught at the University of California (Berkeley) for thirty-five years, as well as at Harvard, Yale and Dartmouth. Reed is a member of Harvard’s Signet Society and Yale’s Calhoun Society. He lives in Oakland, California.