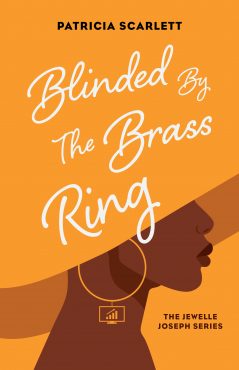 Blinded by the Brass Ring

Not one to rest on her laurels, Jewelle Joseph is determined to add the new VP of Sales and Distribution to her list of accomplishments. But she’s not the only International Sales Executive reaching for the brass ring. From the glitzy office towers of Toronto to the glamorous world of the international television market in Cannes, her colleague and competition, Chantal Mercier, schemes to obstruct Jewelle’s path to the prized position. With mounting stress at work, Jewelle looks for encouragement from her boyfriend Anthony Brown but receives it, instead, from Johann Eriksson, a dashing and successful Swedish television executive. Her posse—a circle of strong women who support each other—keep Jewelle grounded through work and love in Toronto or the shrapnel from the bitter divorce of her parents who live in Montreal.

Patricia Scarlett‘s stories reflect contemporary Black life in Canada and explore the intersections of race, class, and culture through a Caribbean-Canadian lens. Her early experience in television began at TVOntario where she worked primarily in international sales. Looking to the many journals she had kept over the years about the inner and outer workings of the domestic and international TV industry, Patricia wrote her first novel Blinded by the Brass Ring. Patricia regularly attends industry trade events such as MIP-TV and MIPCOM in Cannes, France. She is the recipient of the 2020 Afroglobal Television Media Award. Patricia Scarlett was born and raised in Montreal.

“In this intriguing story of love, betrayal and office politics, Patricia Scarlett grapples with the nuances of cultural diversity in the late 1990s, personal goals and dreams, and the way in which we tend to allow outside elements and the pressing demands of family to interfere with our own deep and personal desires.” Dr. Marva McClean, Author and Professor

“A fun and flirtatious insight into the nuanced experience of being an ambitious career-driven woman living a Black experience in a White workplace. A familiar conversation that has not been heard yet, brought to life by complex personalities with secrets and insecurities that mirror characters in our own families.” Donisha Prendergast, Writer/Director, Actor, Public Speaker

“Gripping, fresh and unpredictable. Enter into the cutthroat world of television programming where the best villains wear size 0.” Seema Vijaya