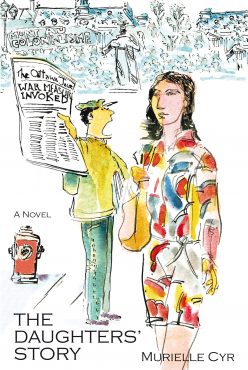 Nadine is banished to a home for unwed mothers in 1950. She’s 15. Her baby daughter, whose father is shrouded in secrecy, is put up for adoption without her permission. Vowing to reunite one day with her daughter, she cuts all ties with her dysfunctional Irish and French-Canadian Catholic family whose past is cluttered with secrets, betrayals, incest and violence.

It’s now October 1970 in Montreal. Following two FLQ kidnappings, Ottawa proclaims the War Measures Act and sends the army into Quebec. These staggering events indirectly bring about a reunion between Nadine and her daughter Lisette, now 20 years old and embittered after being bounced from one foster home to another. Eight months pregnant, Lisette and her partner Serge, who is close to the FLQ, need money and see Nadine as a possible source.

A family saga with World Wars I and II, the Great Depression and the October crisis as backdrop, The Daughters’ Story tells the unsung, yet intensely passionate, tale of women whose unquenchable need to belong drives them to survive and thrive despite cruel conditions.

Murielle Cyr is author of Culloo, a novella for young adults. The Daughters’ Story is her debut historical fiction novel. She holds Creative Writing and Education degrees from Concordia University. Murielle Cyr lives in Richelieu, Québec, just south of Montreal.

“There are many good storylines in The Daughters’ Story … it is an utterly credible novel of tremendous compassion and insight into the times.” – James Fisher, The Miramichi Reader

“This is a gripping and deep story about the far-reaching and life-altering consequences of selfish or even seemingly selfless decisions, brought dominantly on women by men.” – Christoph Fischer, writerchristophfischer ~ Books, Reviews and Bookish Thoughts

“If literary fiction should be primarily interpretative, with its core purpose to help the readers understand the world around them, then The Daughter’s Story (…) is a brilliant example of this genre. Simple but fluid prose, strong female characters, mastery of timelines and backstories, and tempered and historically accurate treatment of nationalist grievances make The Daughter’s Story a joy to read.” Ian Thomas Shaw, The Ottawa Review of Books.