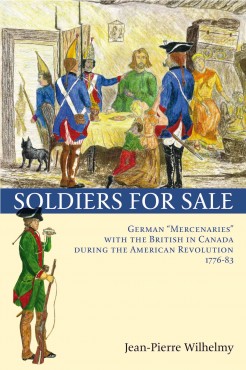 “… a must…” Canada’s History (formerly the beaver).

The British Army that fought the American Revolutionaries was in fact an Anglo-German army. Britain was unsure of the commitment of English soldiers to fight other English-speaking people and also doubted the loyalty of the Canadiens whom it had recently conquered when it took control of New France. King George III thus turned to his relatives the princes of German states to obtain the much-needed troops in return for large amounts of money. Some German princes even complained that not enough soldiers were dying which meant less money for them.

Known in the United States the Hessians, many of these soldiers, were dragged unwillingly from their families and sent to fight in a war on a remote continent that didn’t concern them. A large number of them remained in Canada after the war and melted into the French and English-speaking societies. This is their story, which was largely unknown even to their own descendants until Jean-Pierre Wilhelmy wrote this book.

The following excerpt of a letter from Landgrave (count) Frederick II of Hesse-Cassel shows that the real mercenaries were the princes who sold the German soldiers.

“I cannot forgive the English chroniclers for lowering the death toll so greatly, why not admit honestly that instead of 900 we lost 1700! (…) Do these gentlemen really believe that 30 guineas more or less mean nothing to me? Particularly after my latest expensive journey during which I contracted many new debts…. signora F., whom I have just engaged in Italy, will cost me more than 500 guineas a year and these blasted Englishmen want to quibble over wounded and disabled men.”

“… a must… if you’re interested in early Canadian history–and especially if your name is Albus, Koch or Ziegler– then this is a book for you.” Mark Reid, Canada’s History (formerly The Beaver), Aug. 2012.

“A valuable book for the serious student of the American Revolution, of warfare during the enlightenment, or of the history of mercenary troops.” (A.A. Nofi, StrategyWorld.com, Feb. 2, 2013)

“Jean-Pierre Wilhelmy opens a wide window on an historically and culturally significant episode in Canadian-American relations that should be of interest to folks on both sides of the border. (…)The depth of Wilhelm’s research is outstanding. … As a jumping off place for further research and reading, Soldiers for Sale is a gem. (…)Students of the American Revolution, Canada, or warfare in general, plus inquisitive casual readers, will all find Soldiers for Sale a fine investment of their time.” (John Michael Senger, Foreword Reviews, Spring, 2012)

“Until the work of Jean-Pierre Wilhelmy, these soldiers were largely ignored by historians… The publication of Wilhelmy’s study in English is very welcome and should be of great significance in making this group of eighteenth century immigrant soldiers better known.” – Virginia Easley DeMarce, Ph.D, Past President of the National Genealogical Society (United States)

“Some works are models and serve as reminders to new historians. Soldiers for Sale is one such book. The author carefully sets the historical stage and meticulously describes the recruitment of soldiers, their arrival in North America, and the contribution of those who chose to remain.” Jean Levasseur, Nouvelles etudes francophones

“Jean-Pierre Wilhelmy’s research on the German mercenaries is the most important study in Quebec on this subject… It is a ‘must’ read for anybody interested in the subject.” Louise Chevrier, Histoire Québec

Jean-Pierre Wilhelmy is a Montreal historian who discovered a major unexplored part of Canadian and American history. He has also written three historical novels based on his research

Marcel Trudel (1917-2011) was Emeritus Professor of History at the University of Ottawa. He published more than 40 books on the history of New France and won many awards, including the Order of Canada and the Ordre national du Québec.

Virginia Easley DeMarce is a historian who specializes in early modern European history. She has a Ph.D. from Stanford University in 1967. She taught at the college level for fifteen years, at Northwest Missouri State University, and George Mason University and published a book on German military settlers in Canada after the American Revolution. A past president of the National Genealogical Society, Ms DeMarce has written or co-authored a number of formative short stories and novels in the 1632 series collaborative fiction project.

Buy ebook here or below