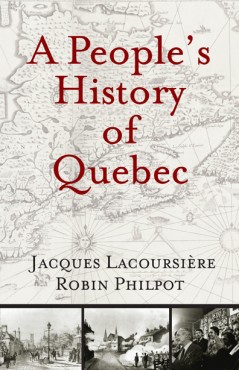 This lively guide to Quebec history tells the fascinating story of the settlement of the St. Lawrence River Valley over nearly 500 years. But it also tells of the Montreal and Quebec-based explorers and traders who travelled, mapped, and inhabited most of North America, and embrothered the peoples they met.

Combining vast research and great story telling, Jacques Lacoursière and Robin Philpot connect everyday life to the events that emerged as historical turning points in the life of a people. They thus shed new light on Quebec’s 450-year history—and the historical forces that lie behind its two recent efforts to gain independence.

Jack Kerouac, although he was born in Lowell Massachusetts in 1922,  only learned English at the age of six. He constantly referred to his Quebec ancestors, the Plains of Abraham, and what he described in Visions of Gerard as the place “the French came when they came to the New World, the hardness of the Indians they must have embrothered to be able to settle and have them as conspirators in the rebellion against contrarious potent churly England.”

“The best place to start for an understanding of Quebec politics is to go through Quebec’s long history. Since arriving in Montreal, I’ve been reading A People’s History of Quebec in order to better understand the history of the city where I now play.” — Andrew Wenger, Hermann Trophy Winner and Professional Soccer Player with the Montréal Impact. FROM MONTREAL WITH LOVE…

“English readers can appreciate Lacoursière’s approach in A People’s History of Quebec, a new book on which he collaborated with author and publisher Robin Philpot. It is a concise history of Quebec, from the earliest days of colonization to the aftermath of the most recent sovereignty referendum, rendered in an easily read 200 pages. As fascinating as the march of great figures and the mapping of landmark events are the details of how they affected the ordinary life of their times.”
Hubert Bauch, The Montreal Gazette, July 2009

“At a trim 208 pages (including a tidy timeline of Quebec history and a useful index) and in a soft cover, it’s the kind of book that’s easy to carry on a trip and easy to bring to bed. It’s also a good read which offers lots of room for reflection.”
Nick Fonda, Quebec Heritage News

“A People’s History of Quebec is both an excellent history book to refresh the reader’s memory and a rich introduction to a people who were told they had no history. A great read.”
Hélène de Billy, writer, biographer, journalist

“Jacques Lacoursière, recipient in 1996 of the Pierre Berton Award, is a prolific and renowned French-Canadian author and historian who is to Quebec, what Pierre Berton is to English Canada.”
Canada’s National History Society, Publisher of The Beaver.

“If Lord Durham had met Jacques Lacoursière, he would surely not have written that the French Canadians were a ‘people with no history and no literature’. In fact, in Quebec, Jacques Lacoursière’s name is synonymous with history.”
André Champagne, Radio-Canada

JACQUES LACOURSIÈRE is a household name in Quebec. His five-volume Histoire populaire du Québec has been a bestseller since the first volume appeared in 1995. To date more than 300,000 copies have been sold.

Born in Thunder Bay, Ontario, ROBIN PHILPOT is a Montreal writer and translator. He is publisher of Baraka Books.