François Barcelo’s I Hate Hockey, translated by Peter McCambridge, is “an excellently crafted” story according to  “The Site for Die Hard Crime & Thriller Fans”. 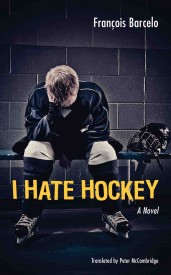 AVAILABLE IN ALL EBOOK FORMATS

“The National Hockey League season was supposed to begin last week. However the puck won’t be dropping, teeth won’t be loosened, and nobody’s getting slammed into the boards just yet. A dispute is raging over revenue, between the owners of the clubs, and the players. So this 100-page noir novella from one of French Canada’s most lauded authors seems an apt one to review. At the moment plenty of our Canadian readers must hate hockey, or at least those governing the sport, as it seems there won’t be a 2012-13 season.

Antoine Vachon hates hockey too. He wasn’t good at it as a kid, which tends to marginalise you if you live in the province of Quebec, where nearly everyone else absolutely loves the sport. Antoine has carried on regardless, but his dilemma comes via a phone call from the man who runs minor hockey in Saint-Zéphyrin and its environs. The coach of the bantam team which Antoine’s son Jonathan plays on has been murdered and nobody else is available to stand behind the bench for the team’s away trip facing the Morinville Loons.

Reluctantly he accepts, wondering how and why the coach died, and boards the bus for the three hour ride into the Quebec hinterland. He’s shown little to no interest in his son’s hockey thusfar, doesn’t know any of the players, nor even what the Z on their jersey stands for. They only asked him to do it as he’s the only dad who’s unemployed, having lost his job at the General Motors dealership.

Our narrator is sardonic, witty and also highly annoying. Typical of noir fiction, he’s one of those characters with an incredible ability to deceive himself – in fact, he’s a very deluded individual. He’s been single the last year or two, having been caught cheating on Jonathan’s mother Colombe. Now he lives in a village just outside Saint-Zéphyrin, whose only claim to fame is a giant sheetmetal effigy of a cow standing on the hilltop.

The game itself goes badly for the Zs until coach Antoine gets a game misconduct for jumping comedically onto the ice during a brawl. His team stand up for Kim Nguyen, their Vietnamese star player, who’s been dumped over the boards. Following his ejection they turn around a 3-1 defecit and win 6-4. However there’s a strange atmosphere amongst the players and things get even more bizarre when they arrive at the motel to stay the night before heading home.

Antoine begins to suspect that Jonathan, Kim and other boys were sexually abused by the murdered coach, and quickly reaches his own conclusions about who killed the man. His imagination goes into overdrive, and the book grows both darker and funnier with each page you turn, and each crazy notion he runs with. Sometimes his reasoning is quite compelling, but then he drifts into pure fantasy, he frequently talking at cross-purposes to fellow characters including Jonathan, his ex-wife Colombe and eventually the police.

“It turns out, this short book isn’t about hockey at all. It’s not even about who killed the coach. It’s more to do with the darker side of human nature – from basic matters of honesty and integrity through to child abuse, sexism, racism and murder – all delivered via an annoying, funny and deeply flawed character. Canadian readers will enjoy this bit of noir woven into the fabric of Quebec life, and non-Canadians may feel endeared to that local flavour. The ending is a real eye-opener, but we won’t spoil that for you….

DISCRIMINATION IN THE NHL sparks debate

Bob Sirois’s book Discrimination in the NHL Quebec Hockey Players Sidelined has sparked some real debate in the media. Invited to Toronto to appear on TSN’s Off the Record with Michael Landsberg, Bob Sirois found that former New Jersey Devils star Bobby Holik agreed “100%” with him. Watch TSN Excerpt

He also has been interviewed many times on radio in Ontario and the West. Globe and Mail reporter Jeff Blair interviewed bob on Fan 590.

While in Toronto, he alos met readers and some local media at the Toronto bookstore A DIFFERENT BOOKLIST at 746 Bathurst.

The book has also been reviewed — and criticized — by Stephanie Myles in the Montreal Gazette and the Edmonton Journal in an article Sirois spices discrimination debate.

Here is Bob Sirois’ reply to that article:

Discrimination in the NHL?

In the Gazette’s review of Discrimination in the NHL, Quebec Hockey Players Sidelined (Hockey Inside/Out, Nov. 16, p. D18) the lack of first-hand accounts is criticized. These were purposely set aside in order to focus on facts. The model used was that of American sociologist David Marple who first identified discrimination towards French-speaking hockey players in the 1970s. He had previously identified similar discrimination against African Americans in professional basketball. Moreover, Professor Marc Lavoie of the University of Ottawa oversaw the methodology used. Doubt is cast on my conclusions about defensive hockey played by Quebecers, yet no reference is made to the most important figures, namely those drawn from Professor Lavoie’s study analysing defensive play in all junior leagues in Canada and showing that defence is equally important in Quebec, if not more so.

Michael Landsberg of TSN asked me on air what the most important point is. I replied, “when I talk about discrimination, I’m talking about equal or comparable talent. Most NHL teams, at equal talent or comparable talent, will not take a Quebecer, will not take a European, they will not even take an American player, they will take a good ol’ Canadian boy.” Landsberg then asked former Devils Star Bobby Holik what he thought. Holik replied, “I agree with him 100%. Because I’ve experienced it myself where I believe I had to fight for my spot, fight for my ice time, more and longer than the Western Canadians or Ontario-born and raised.”

Bob Sirois, author of Discrimination in the NHL
Montreal, November 16, 2010