The Arusha Accord was martyred along with the Presidents of Rwanda and Burundi on April 6th, 1994. The UN and the so-called great powers allowed Arusha to be negated, eclipsed by an army bent on stealing power away from the people and their designated representatives. The Arusha consensus was thrown away. All parties and leaders supporting the Arusha process were demonized and criminalized. The people were robbed of their right to choose.

I want to thank the International Women’s Network for Democracy and Peace for presenting me with this award named for the inspirational leader, Victoire Ingabire Umuhoza. I hope I will be a worthy recipient.

All who support peace and freedom are indebted to the International Network because it has become an institution that works fearlessly and consistently to bring peace and freedom to the Great Lakes Region of Africa. By establishing this annual award you endorse the courage and example of an extraordinary political leader. Your diligent and conscientious activity, the website, the public meetings and rallies guarantee that Ingabire Umahoza is not alone. Because of your initiative, all of us can rally to her cause in challenging tyranny. The principles she embodies must inevitably win. “There is no hero, without brave followers” says the proverb. Thanks to everyone here, supporters around the world, and in the Great Lakes Region Ingabire Umuhoza has a brave following indeed. 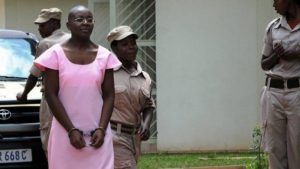 Victoire Ingabire Umuhoza is in prison in Rwanda for the crime of having run for president of Rwanda against dictator Paul Kagame.

Victoire Ingabire has been in prison for 8 years. It is an international scandal that a strongman government is afraid of a soft-spoken civilian woman. Our common cause of political freedom is so much enhanced by the fact Victoire Ingabire Umuhoza, unlike her tormenters, does not have an appetite for power, but rather an appetite for justice. Her goal is a workable political system that respects the rights of all Rwandans, most especially freedom of speech.

As a defense investigator and broadcaster I have spoken to Rwandans from all walks of life including many former close colleagues of Paul Kagame. They share the goal of Ingabire Umuhoza, and also let us add Diana Rwigara, for a system that protects freedom of conscience and political choice. And from my many contacts with Rwandans I can state that those calling for a representative system free of intimidation, they are not driven by vengeance or hatred.

Now, let us remember that there was a moment in the early ’90s when Rwandans made a clear choice on what form of government they wanted. After negotiations they reached a national consensus. It was called the Arusha Accords of 1993. After years of warfare, political parties representing distinct political opinions agreed on a multi-party system, with an independent judiciary, freedom of the press, and a popular vote. These Accords had the support of all mass institutions and leading personalities of the nation.

And, for all of us here, it is important to underline that the Arusha Accords had the support of all the foreign embassies. The US, France and the Organization of African Unity took particular responsibility to bring the promise of a multiparty system into being. Everything was in place for a democratic order. What we are calling for today, was in that agreement. It was our common goal and responsibility. 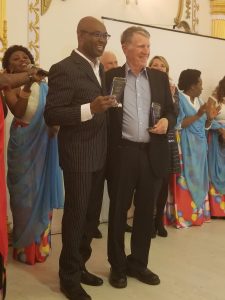 But, the Arusha Accords was martyred along with the Presidents of Rwanda and Burundi on April 6th, 1994. The UN and the so-called great powers allowed Arusha to negated, eclipsed by an army bent on stealing power away from the people and their designated representatives. The Arusha consensus was thrown away. All parties and leaders supporting the Arusha process were demonized and criminalized. The people were robbed of their right to choose. A terrible price has been paid, most of you here know the tragic details far better than I do.

Without the principles of Arusha, we have an imposed order, an order of “victor’s justice”. Even at the UN Court which promised to bring to justice anyone guilty of crimes against humanity, no one from the RPF was charged, let alone tried. Victor’s justice is no justice. This can only be corrected by a proper judicial system, as envisioned by the Arusha Accords, established by a system of popular representation.

The Accords were the right path, and we must call to account governments and statesmen who connived at allowing militarism to prevail over the international values of democratic rights and freedom of speech. We have to insist that international bodies return to the working plan for democracy, the one endorsed by the people of Rwanda.

Lastly, let’s remember Victoire Ingabire Umuhoza is an advocate for peace. You know the saying “When the guns are silent, the muses are heard.” Ingabire calls for peace with Congo and Burundi, and an end to military incursions, or threats of incursions. Rwanda to have a civilian run democratic society. Then the muses of freedom will be heard.

*Phil Taylor is host of The Taylor Report, CIUT 89.5 Toronto and was a defense investigator a the International Criminal Tribunal for Rwanda. A supporter of Baraka Books, Phil wrote the preface to Dying to Live, A Rwandan Family’s Five-Year Flight Across the Congo and an important contribution to the anthology Justice Belied, The Unbalanced Scales of International Criminal Justice. He was awarded the 2018 Victoire Ingabire Umuhoza award in Brussels on March 10. This is his acceptance speech. Journalist and writer Charles Onana also received the Award.

For more on Rwanda, see Rwanda and the New Scramble for Africa, From Tragedy to Useful Imperial Fiction.