(Montreal, 5 Feb. 2018) – Celebrated novelist Thomas Pynchon has kindly read and lauded Fred Jerome’s The Einstein File, The FBI’s Secret War against the World’s Most Famous Scientist to be published in a new updated edition on May 1.

Thomas Pynchon:
“This carefully researched and reported account of Einstein’s surveillance by the FBI adds new, what Einstein might call ‘dimension,’ not only to his personal history but maybe even to our own present-day character as a nation, conceived as it was in the moral vacuum of the McCarthy era, shaped by the Cold War and too many ill-conceived adventures overseas, come to maturity in this current precarious hour. Sometimes what worries the FBI can also serve as a clue to what, somewhere back in our national soul, lingering and toxic, has been eating away at us. In redeeming from the forces favoring general amnesia this essential set of connections, Fred Jerome has given us back a piece of our history, and hopefully of our conscience as well.” 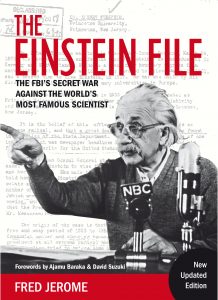 The new edition of The Einstein File, first published in 2002 by St. Martin’s Griffin of New York, contains a 25-page author’s update. Since the book first appeared, Fred Jerome has pursued his research and published two other books on Einstein and his political activism, particularly in opposition to racism but also in opposition to political Zionism and the founding of a Jewish State.

Ajamu Baraka and David Suzuki have written forewords to this edition. Ajamu Baraka is a grass-roots organizer and educator and was the Green Party’s nominee of Vice President of the United States in the 2016 election.

David Suzuki, a Canadian geneticist, broadcaster, and environmental activist, is a unique figure in science and television.