Published by Baraka Books on September 16, 2021

Baraka Books recently launched  Waswanipi by Jean-Yves Soucy (1945-2017) with an Afterword by Romeo Saganash. At the online launch on September 15, Carole Massé, Jean-Yves’ widow, read the following text in French about the importance of Jean-Yves’ stay in the Cree community of Waswanipi in 1963. You can read the original French text here. 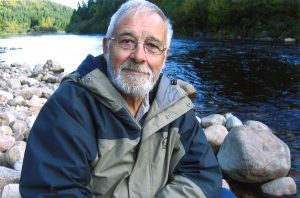 “A unique facet of human diversity”

Jean-Yves often told me that his experience as a fire warden in 1963 at the age of 18 had touched him profoundly because of what he encountered that summer. That is the essence of the story he told in Waswanipi.

The first encounter was not only with a new world for him, that of the Cree, but of a civilization that was different from his and that he immediately liked. The words the writer used to tell the story of his meeting with his two Cree guides, William Saganash and Tommy Gull, leave no room for doubt: it was joyful, with shared laughs and a deep bond. Jean-Yves is curious, respectful, and he is yearning to learn. Everything. His questions touch on his guides’ conception of time, the world we live in, the place humans occupy in the universe, and on the Cree language. William and Tommy provide unexpected and original answers that make him reflect and think in a new way. During his frequent visits to the Cree village, Jean-Yves bathes in Cree Culture and feels at home, he writes. Like being with family. He sees himself and the Cree as equals, as family. His first encounter is therefore with a people that is different from his own people and yet close to him and for whom he feels a solid friendship.

His second encounter occurs towards the end of the summer during a wedding. Jean-Yves and his fellow worker go and buy beer for the celebration, because the law prohibits “Indians” from buy alcohol. After the wedding, he sees the men from the village picking up the bottles and bottle caps on the ground and hiding them in the bottom of the lake. They have to hide the evidence so as not to be caught by RCMP officers. Jean-Yves describes the scene in the book: “It hurts me to see the scars of a profound injustice.” That was the moment when he fully realizes that “the Crees, like other First Peoples, are second-class citizens.” His cry of revolt following this event takes the form of denunciations of the terrible treatment White people have inflicted on them.

His encounter with another people, respecting and liking them, and followed by his discovery of the flagrant injustice to which they are subjected are what marked the teen-aged Jean-Yves, he who throughout his adult life would embrace principles of social justice and equality of all human beings. Despite the fact the world was changing for the Indigenous peoples, changes that would disturb their way of life, Jean-Yves always kept up the hope that they would overcome these changes and obtain justice and equality some time in the future.

In 2013, during holidays at Baie-Trinité, Jean-Yves happened to meet an Innu family (two parents with four children) and he had a long talk with them. When they left each other, he had the following serene and confident words that conclude his story:

“before my very eyes, I can see they’re managing to reinvent them- selves, to lay down new markers in a world that has completely changed on them. And they’re doing that without turning their backs on what they are: a unique facet of human diversity.”