The Riot that Never Was wins Richard-Arès Award

Published by Baraka Books on October 1, 2015

James Jackson, author of  The Riot that Never Was, published in English in 2009 and in French in 2014, received the prestigious Prix Richard-Arès for nonfiction awarded by L’Action nationale, Quebec’s oldest magazine. Each year L’Action nationale awards the prize to an author who published a nonfiction book in Quebec that sheds light on the major issues of Quebec national interest. The prize was created in memory of Father Richard Arès whose prolific output contributed to enrich thought and public debate in Quebec.

In presenting the award to James Jackson, historian Robert Comeau insisted on the importance of questioning our accepted ideas on events that we think we know well. James Jackson did just that in The Riot that Never Was, which has the very explicit subtitle, The Military Shooting of Three Montrealers in 1832 and the Official Cover-up. Comeau noted that until Jackson went back and scrutinized the original sources, historians and lay people alike participated in the “cover-up,” simply because they blindly repeated the official story about a riot.

In short, three innocent French-speaking Canadien passers-by were killed by British troops who opened fire on rue Saint-Jacques, then known as St. James Street. Supporters of pro-Patriote Party candidate Daniel Tracey, an Irish-born doctor, were celebrating his victory in a by-election that ended on that fatal day of May 21, 1832. It was claimed that the people were rioting. Jim Jackson doubted the official story, based on the suspicion that, to his knowledge, never in history had supporters of a victorious candidate rioted. It was always the opposite, the losers who rioted. 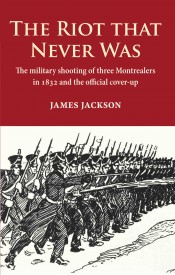 Jackson set to work and proved without a doubt in a book that reads like a ‘whodunit’ that there never was a riot and that the magistrates and officers responsible for the shooting should have been brought to justice. He also shows how important these events of 1832 were in the radicalizing of the Parti Patriote and its leader Louis-Joseph Papineau in the years preceding the rebellions of 1837 and 1838.

For more information, read the summary or purchase The Riot that Never Was.