What the Hypocrites Want You to Forget about Nelson Mandela: His Support of Muammar Gaddafi

Published by Baraka Books on December 6, 2013

On Nelson Mandela’s last visit to Canada, he already complained that people said he was a “world leader” but that he didn’t feel like a world leader here but rather like a “hood ornament” on a car. The fact is that the fawning of European and North American politicians and media over Mandela hides something much more sinister, namely that nobody really listened to him. The most striking example was  Mandela’s steadfast defence  of Muammar Gaddafi of Libya, who not only was among the earliest and most committed opponents of Apartheid but who also defended  Africa’s unity and freedom from external domination until he was murdered by NATO and the current rulers of Libya in October 2011.

Following is a short description of Mandela’s relationship with Muammar Gaddafi excerpted from Max Forte’s Slouching Towards Sirte, NATO’s War on Libya and Africa. (Baraka Books, 2012) You will not see or hear this during the hypocritical chorus over the next few weeks.

“I have also invited Brother Leader Gaddafi to this country [South Africa]. And I do that because our moral authority dictates that we should not abandon
those who helped us in the darkest hour in the history of this country. Not only did they [Libya] support us in return, they gave us the resources for us to conduct our struggle, and to win. And those South Africans who have berated me, for being loyal to our friends, literally they can go and throw themselves into a pool.”2 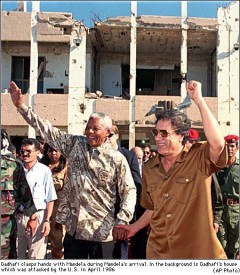 These words were spoken by then South African President Nelson Mandela as he stood next to visiting U.S. President Bill Clinton in late March 1998. Clinton had criticized Mandela’s meeting with Gaddafi. As Bill Clinton had also broached the subject of a UN-led peacekeeping force for Africa, Mandela responded directly and sharply: “I certainly would never put my troops under somebody who does not belong to Africa” (Ross, 1998/3/27).3
The public relationship between Nelson Mandela and Muammar Gaddafi was a very close and warm one, and began from very early. After serving 27 years in prison under the South Africa’s apartheid regime, and merely three months after his release from jail, Mandela travelled to Libya as the leader of the African National Congress (ANC) on May 18, 1990 check that. In an interview given to journalists at the airport in Tripoli, Nelson Mandela declared:

“My delegation and I are overjoyed with the invitation from the Brother Guide to visit the Great Popular and Socialist Arab Libyan Jamahiriya. I have been waiting impatiently ever since we received the invitation…. I would like to remind you that the first time I came here, in 1962, the country was in a very different state of affairs. One could not but be struck by the sights of poverty from the moment of arrival….with all of its usual corollaries: hunger, illness, lack of housing and of health-care facilities, etc. Anger and revolt could be read in those days on the faces of everyone….

“Since then, things have changed considerably. During our stay in prison, we read and heard a great deal about the changes which have come about in this country and about the blossoming of the economy which has been experienced here. There is prosperity and progress everywhere here today which we were able to see even before the airplane touched ground. It is thus with great pleasure that we have come on a visit in the Jamahiriya, impatient to meet our brother, the Guide Qadhafi.”

“We consider ourselves comrades in arms,” Mandela said in thanks to Gaddafi. “You have given military training to South Africans who wanted to obtain their liberation through armed struggle,” Mandela said after hugging Gaddafi outside his tent. He added, “your readiness to provide us with the facilities of forming an army of liberation indicated your commitment to the fight for peace and human rights in the world.” Taken to see the ruins of Gaddafi’s compound in Tripoli, bombed by the U.S. in previous years, Mandela condemned the bombing and insisted on seeing every room in the building (UPI, 1990/5/19). On criticisms of his visit to Libya, Mandela incisively replied:

“No country can claim to be the policeman of the world and no state can dictate to another what it should do. Those that yesterday were friends of our
enemies have the gall today to tell me not to visit my brother Gaddafi. They are advising us to be ungrateful and forget our friends of the past.” (Quoriana,
2011/7/18)